So You Guys Will Know

Some asked me about whether if there is anything being done at Ground Zero where the World Trade Center was located at. Well, much of the area is cleaned. The temporary PATH Station is open. Its exterior design is gorgeous.

The planned-1,776-foot tall Freedom Tower was mired in a guagmire with the designers, feds, city officials et al about little things that might affect the "victims", the "workers", the "future employees" in regards to the safety issues, the memorial issues, the traffic issues -- you get the idea. It is bit strange to lag the process as the residents of New York has to wait for the officials to make it an official "go" to build the tower.

Meanwhile, there is one building that is almost completed -- the 7 World Trade Center, the only building that was not financed by the government. DowntownLad took a picture of this -- he is obviously skilled at taking pictures of buildings -- I know when I see one. 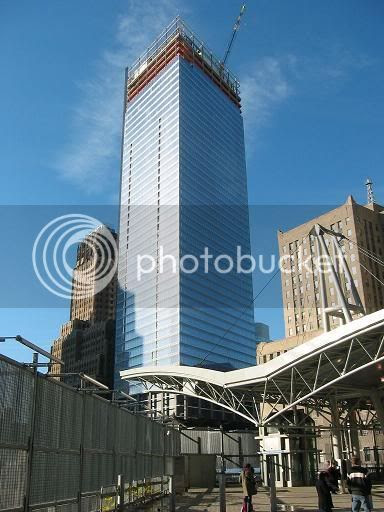 On your left side is the Ground Zero where World Trade Center used to reside. I get annoyed when some folks sell the 9/11 pictures on this particular area. On the right side of the picture with the strange design, that is the temporary PATH station -- PATH is the subway train link to New Jersey, totally separated from New York's own MTA Subway system. You could get off the MTA train and walk out of the station and into the PATH station and head down to Jersey City, though.