His name is Daniel McVay. He was a student at Gallaudet between 1990 to 1994 or 1995, I believe. He was involved with the Buff and Blue newspaper and Delta Sigma Phi fraternity.

If you see him in person, he has an odd appearance to what Mike Boucher probably will describe him, "A guy that has penis on his head" -- nothing wrong with it, though. He is also nerd, to many. Some of you may know his old VAX username as 11DMCVAY who often bombarded inane and funny replies on Gallaudet's legendary VAX's WHATSUPXX Notes Conference. 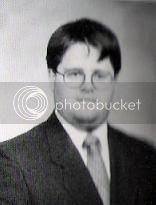 He is currently in the prison for five years and will have to pay $250,000 fine for Internet-based software piracy -- for further information, you can read this on your own.