Recently tonight, Gus and I laughed, howled, cried and choked on the antics of Bam Maguera on MTV's program. Bam fucking ROCKS!

MTV has a show program called "Viva La Bam" -- some of you readers could not believe my antics at times when I do stuff to shock others, just for the heck of it -- Bam fucking reminded me of ME but what he did was very extreme.

He relentlessly bashed on his parents, bashed his Dad all the time with stuff that you could not believe! It was hilarious. I know Bam loved his parents but it is the way he expressed his love for his parents, by driving them nuts. 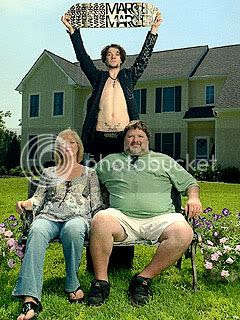 Bam the Terrible with His Parents
I discovered that he lives not far from where I am -- in West Chester. His gang is rowdy -- basically, his show is a statement to tell the world to lighten up and make fun of things around us! Enjoy what is on the table, that is!

Bam often made do stuff to wake his Dad up from the bed -- either socking him to wake him up, throw syrup and butter on him, throw dirty water on his parents to shock them ... when they thought of something to do, it often comes with the "blighting" of his parents' house.

Gus and I howled when Bam and the gang ruined his parents' anniversary vacation in Paris but ended up hauling their asses to Venice, Davos, Monaco and Florence -- Bam brought his uncle on the show, I believe, whose name is Don Vito -- that uncle actually believed that the Leaning Tower of Pisa is ... The Leaning Tower of Pizza.

I heart Brandon Maguera, his parents and his gang. For two hours, we fell in love with Viva La Bam -- it is scary, though, Bam reminds me of me in many ways. 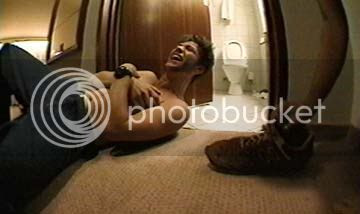 After Pulling A Stunt, Bam Guffawed
When I made fun of things in life and people -- people said that I"m bitter -- they needed to check Bam Maguera first in order to understand where I stand -- it has nothing to do with these silly comments that people wanted to label me with words like childish, anger or bitter. In fact, people who whined are the ones that are bitter, angry and/or childish. When I am done with messing things up, I try to leave the scene with a sly smile. Just ask kaybee, Surdus or McFly.