I love Sunday nights -- time to watch "The Malcolm In The Middle", "The Simpsons", "Desperate Housewives" and "Viva La Bam".

And I'm amused that McWeenie continues to lie with this comments like:

"You’re not the only one who banned him. After giving him several respite from banning him, he continued to act just as you described. Needless to say, you can guessed what happened next. And what does he do? Complained on his blog that I banned him. Learn to lick your wounds and move on is all I can say."

McWeenie, let's be clear on this subject. I care less if you banned me. You never gave me "several respite" -- I do not care if I have to behave within your imaginative rules. I never complained on my blog that you banned me -- I merely mentioned that I am amused by your antics because you're a retard to start with. I do not need to lick my wounds. I'm already beyond you by a long shot. In fact, I entertained more people in a day than you can do in a lifetime. And you still read my blog, commented on other blogs that I followed, not your own. Always following me around, trying to attack me is a sign of immaturity, jealousy and childish act.

Accept it, McWeenie, you're nothing -- even people will say "Who McConnell?" As for me, people either love or loathe me -- you have nothing. Only "Who?" -- your problem, not mine.

Time to get back to the show, Desperate Housewives is on. Oh, by the way, McWeenie, I was at Gallaudet when the murders occurred, and you were not. Do not try nor attempt to speak FOR us, fucker. You were not there. You were not there to be interrogated, witnessed nor experienced the whole drama -- and I did. So do not try to reason your arguments with something that you never experienced, dumbfuck. 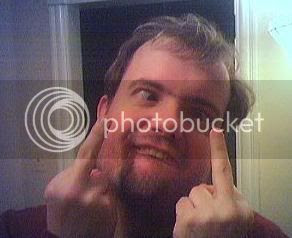 Oh, that is for you, McWeenie.