Folks, I posted this on my Facebook wall few days ago and it has brought so much positive out of people in my community. Here is the post below.
Cheers,
R-
* * *
Last week (Monday, June 16), Mom told me that she was worried about her close friend who was hospitalized for some illness, and was moved to health & rehabilitation center to recuperate her health from some illness/injury. Not only that, the facility wants to evaluate her to see if she can go home on her own or has to move to the assisted living facility or a nursing home. Mom's friend grew up in the area between Waverly, Virginia and Surry, Virginia. That particular rural area is right across the James River from Jamestown, the first permanent English settlement in the New World.
Thankfully, Mom's friend, Mildred has a good memory - she was able to remember Mom's address and wrote several letters to Mom to tell her that she's stuck at a local health & rehabilitation center in Waverly. A facility that is about 730 feet away from her apartment across the field. See the picture below. 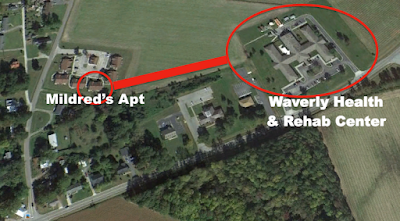 Mom said the letters by Mildred said that she had a hard time asking for VP to be installed in her bedroom. Mildred also complained that other hearing patients has their own iPads, laptops & cellphones. When Mildred asked the social worker to go to her apartment and get her videophone box and install it in her bedroom, they said no.
I heard, saw and read enough to know what's going on. I told Mom to give me the name of the facility. I made a VP call to the facility. I got ahold of Mildred's social worker who cited the HIPAA laws not to discuss her case.
She was right, she can't discuss about Mildred unless I have Mildred's permission first. I told her that I understand the dilemma because I used to work in an agency similar to her when I lived in New York.
I also told her that if she does not do something about this within 2 weeks, I'll file a compliant immediately with the Department of Justice's Civil Rights Division and file a lawsuit against her and her workplace. I mentioned that in the last two cases, I forced two entities to make settlements with me and my family. I told her that I can easily win this case if she does not get her VP to her bedroom at that facility.
Enough said, she was rattled and the VP interpreter said that her voice was shaky as she called the female supervisor to take over the call. I explained about Mildred's discriminatory incident.
The supervisor said that she has been encouraging Mildred to come to her office to use her laptop and set up the Skype account under her supervision. I told her that no, it is not acceptable:
1) Because Mildred does not use her computer therefore she does not know what the internet or Skype is all about. She only knew how to do the videophone through nTouch box which was installed by Sorenson Installer in her apartment.
2) Because the hearing patients are able to use their laptops, cellphones and iPads anytime without any supervision, why must Mildred be under her supervision whenever she wants to call her friends?
Her Supervisor's proposal is obviously unfair & it falls on discrimination under Section 504 Rehab of 1973 & Americans with Disabilities Act. I told her that I knew where Mildred's apartment and where she is staying for the time being. The apartment is right across the soybean field I told her to get her VP box and installed it in her bedroom within two weeks from the call on or I'll file a complaint and a lawsuit against her and the facility at once.
The supervisor asked about whether if Mildred's VP box can break the firewall? Will people use her VP box to hack and break through their firewall system and steal the facility's records? I told her that the VP is not a computer, it is an equipment that focused only on broadcasting TV between Mildred and her friends.
Then I told her about the video relay service which I asked that particular VP interpreter (from SorensonVRS) to explain and fill in to the supervisor on what the VRS & VP are all about. Not only that, the SorensonVRS interpreter provided her with the contacts to reach Sorenson Communications for further information on this matter.
IN ending, I was tough on her and told her that I am not afraid to sue her and her facility for the violations on a Deaf patient who repeatedly begged her social worker to get VP from her home just 700 feet away.
And I told her that I'm very impatient person and I expected her to get the VP for Mildred within two weeks or I will instigate this with my attorneys on behalf of Mildred. The supervisor asked me to give her some time to follow this up. She has two weeks or else. Yes, I gave her an ultimatum.
Four days later on June 20, 2015 - After arriving home from shopping, swimming & dining, Mom quickly alerted me to see who was on the "Missed Calls" and "Messages", it reads: 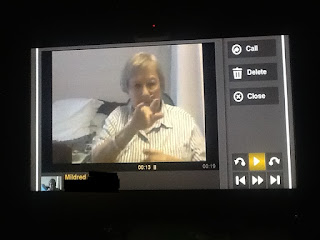 Mildred Nxxxxxx.
When i saw the name, I smirked.
You see, educate the public about Deaf-related rights with a friendly attitude does not work very well. Which is why I refused to educate the public with a smile on my face. Instead of educating them, I simply was tough, hostile and demanding - Do it or I sue you, your call. This way, the public will never forget about it because I intimidated them at all costs.
And what happened last night is the proof on why I felt being rough towards hearing people is much more effective than educating ignorants with a smile on my face.
Cheers,
R-
Posted by Ridor at 4:27 AM No comments: Links to this post

Dawn Is Lying As Usual.

Someone told me that Dawn Schriver posted a rant on her wall acting like a victim more than anything else.  She claimed that I made $400 from January 17, 2013 vlog on my channel.  She was lying.  When she lied, it made my job much easier to prove the facts.  Look at my Google AdSense.  The so-called vlog that Dawn made was on January 17, 2013. Look at the money I produced in the next two weeks. It is not that much. Only less than $120. 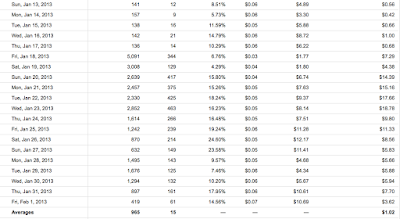 The earning reports are on the last column on your right.

Dawn, where did I make $400 out of this?  Here is another statement on AdSense.

Dawn Schriver, probably still butthurting when I chose not to acknowledge her existence last Friday evening at someone's graduation party, claimed that I never made a donation to Sabrina Blount. I had to laugh out loud. In fact, I was one of the first 25 people who donated to Sabrina Blount ... a month ago.  Not only that, I also gave two $5 bills into the jar at Dingo hosted by Baltimore Metropolitan of Silent Oriole Club which totaled $101.28.  Tracey Milo and SOC President Nancy Long Billingslea can vouch that we raised the amount for Sabrina Blount.

Let it be known that I did make contributions to Sabrina Blount as well as helping her out with funds.

It is true that I did not donate a cent to Dawn Schriver back in 2013.  I was going to make a contribution but the goals has been met and the site has been closed. At that time, I defended her. In fact, I defended her for more than two weeks. When I get to read the court cases, dockets et al, I realized that she was not just a victim. She was also the perpetuator. But since she asked me for my help, I jumped in that because I had a faith in her. Boy, I was wrong. I started to see things pop out of her.

I get to see her true colors when she was brought on Deaf Thought Police as Admin (which was done without Jason Lamberton or mine's approval), she was intoxicated with power - when she came in as Admin, she already had the list of people she wanted to ban from DTP.  Needless to say, that did not sit well with me and Jason. When Jason said no about surrendering the group to the Admins fully, Dawn won't take "no" as the final answer.  She bullied & intimidated him enough for him to kick & ban her permanently. I supported his decision completely because it worked - it cuts her voice out just like that.  It also forced her to return to her original roots:  DeafVideo.tv where she has to mingle with that kind of crowd.

It is interesting that Dawn has repeatedly passed herself off as a victim but if you see how she approached people in person, that was not the so-called PTSD antics she made. The way she treated the others are alarming. I am very profane person, I'll admit to that but I don't intimidate or terrorize people like that.  I don't call the Police on my ex. I don't hide my pet from anyone else. There are little things that she did to people she disliked, to people who won't be intimidated by her ... Hell, I can continue this all night long but no, I won't.

For sure, I am glad I did not donate a cent to Dawn's fundraising back in 2013. Do I regret that I helped her by defending her and allowing her vlog to be on my Channel??  No, not really.  I was glad to be part of something that closed one bad thing for her in order for her to live on her own.

How she fared on her own afterwards is something that I do not like nor care to see. We are better off not being friends. Whatever she says, I don't believe anything out of her mouth. I never saw her attend any deaf-related functions in Frederick County outside of MSD. I already showed you the proof that I did not make $400 when her vlog was on my channel back in 2013. And I donated to Sabrina Blount while she claimed I never did do that. And everything she said about me is not even true at all.

I think she is just upset that I made a little paragraph about her on my previous entry on my blogsite, questioning her "injury". I also think she was upset that the efforts that I put in with Anne Marie Mariam, Sandy Rae Scott, Julie Rems Smario & Swanhilda Lily in the last 7 - 10 days has stolen the spotlight away from her. Not only that, I also publicly announced that I absolutely refused to support the Walk for Kelly sponsored by MSD Booster Club run by whom? Dawn. Why? I already said my piece - I cannot support someone who kept on defending her son that he was innocent when there were too many reports that her son made sexual assaults upon others, especially at Gallaudet. I'm not going to donate a cent to this event this coming Sunday hosted by MSD Booster Club. I wish them well.

R-
Posted by Ridor at 7:49 PM No comments: Links to this post