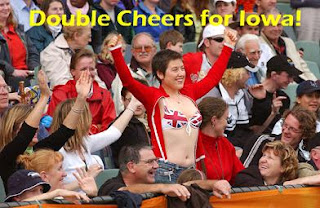 The Supreme Court of Iowa has deemed the 1998 ban on gay marriage as unconstitutional and has cleared the path for gays and lesbians to marry.

I will admit that I mistook Iowa as a backward country that often lags behind the rest of the country. Iowa may be the third state, first in the Midwest, to permit the gay marriages after Massachusetts and Connecticut.

This is progress, folks.

I never had an opportunity to visit Iowa in the past. But in the last 24 hours, I had been surfing some websites about visiting Iowa. Des Moines seemed to be interesting place to visit, though. My Dad told me a story about driving on Route 20 from Dubuque to Sioux City -- he said that the scenic was very plain but yet astonishing. The corn? They're taller than me (I'm 5'6") and Dad as well. He said it took nearly all day to drive from Dubuque to Sioux City (He drove there in late '50s).

Folks, I highly recommend y'all not to visit Utah and to visit Iowa should you make a plan for travelling. After all, Iowa is progressive and Utah is not.