Who Is Roy Cohn?

After reading the lengthy articles about Mayor James West of Spokane who is either a gay pedophile but importantly, himself a Conservative Republican. I noticed that he fits the pattern of Roehmosexual. Ernst Roehm was a loyal Nazi to Adolf Hitler who was also gay. Then in the end, Hitler had Roehm murdered with his "boys".

Thus coined the new meaning which CannonFire named for gay persons who seemed to harbor some kind of self-loathing upon themselves.

Roy Cohn is perhaps the biggest Roehmosexual of Gay American History, what he did to lots of people, straight or gays, were appalling to a point where an episode of The Simpsons on FOX-TV cracked a line in May 16, 1999 when money management guru Chuck Garabedian explained that he got his suit cheap with this hysterical line: "because Roy Cohn died in it."

One person said that if you wanted to stare at the face of evil, you only need to look at Roy Cohn's face. 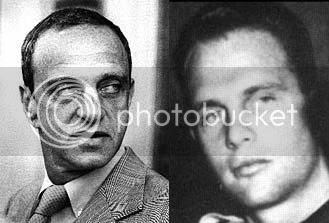 Roy Cohn ~n~ David Schine
He ultimately died of AIDS in 1986, despite the fact that he tried to smokescreen that he died of Liver Disease.

Roy Cohn is famous for being the lawyer with Senator Joseph McCarthy, a conservative jerkass who went on to accuse many people of being Communists. Some are true, some are not. Either way, many careers were derailed. Some killed themselves in the process, some were intimidated. Roy never regrets it. What brought the blow to Senator Joseph McCarthy occurred when Roy found out that his lover, David Schine was going to be drafted -- Roy tried to turn the accusations of communism onto the Armed Forces.

Schine died in an airplane crash with his "supposedly" wife and a son few years after he left Cohn after the media embarrassment focusing on their relationship.

There were two films that focused on Roy Cohn's mind-boggling behavioral antics -- you can rent "Citizen Cohn", portrayed by John Woods. Its ending part is sad and prophetic. And the other one is the most recent one and acclaimed film in American History -- Angels in America. It talked about Roy Cohn as well. I read a brief script of what Tony Kushner, the screenwriter of Angels in America, wrote about the conversation between Roy Cohn and his personal doctor. It chilled me to no end.

RC: Very interesting, Mr Wizard. Why the fuck are you telling me this?
H: Well, I have just removed one of three lesions which biopsy results will probably tell us is a sarcoma lesion and you have a pronounced swelling of glands in your neck, groin, and armpits. Lymphodenopathy is another sign, and you have oral candidiasis and maybe a little more fungus until the fingernails of two digits on your right hand. So. That’s why I’m …
RC: So this disease …
H: Syndrome.
RC: Whatever. It afflicts mostly homosexuals and drug addicts.
H: Mostly. Hemophiliacs are also at risk.
RC: Homosexuals and drug addicts. So why are you implying that I … What are you implying, Henry?
H: I don’t think I was implying anything.
RC: I’m not a drug addict.
H: Come on now, Roy.
RC: What? What? ‘Come on now, Roy’ what? You think I’m a junkie? Henry? Do you see tracks? [Pulls up sleeves]
H: This is absurd.
RC: So say it.
H: Say what?
RC: Say Roy Cohn, you are a …
H: Roy?
RC: ‘Roy Cohn, you are a …’ Not ‘Roy Cohn, you are a drug fiend’ but ‘Roy Marcus Cohn you are a [makes mouth noise] …’ Come on Henry, it starts with an ‘H.’
H: I’m not going to get in to th …
RC: With an ‘H’ Henry, and it isn’t hemophiliac. C’mon!
H: Why are you doing this Roy?
RC: No I mean it. Say it. Say ‘Roy Cohn, you are a homosexual.’ And I will proceed, systematically, to destroy your reputation. And your practice. And your career. In the State of New York, Henry. Which you know I can do.
H: Roy, you have been seeing me since 1958. Apart from the facelifts, I have treated you for everything from syphilis …
RC: From a whore in Dallas.
H: From syphilis to venereal warts. In your rectum. Which you may have gotten from a whore in Dallas, but it wasn’t a female whore.
RC: [Nods.] So say it.
H: Roy Cohn, you are … You have had sex with men. Many, many times Roy. And one of those men, or any number of them, has made you very sick. You have AIDS.
RC: AIDS. [Shakes head] You know, your problem, Henry, is that you are hung up on words. On labels. That you believe that they mean what they seem to mean. AIDS. Homosexual. Gay. Lesbian. You think these are names that tell you who someone sleeps with. They don’t tell you that.
H: No?
RC: No. Like all labels, they tell you one thing and one thing only. WHERE does an individual so identified fit in the food chain? In the pecking order? Not ideology or sexual taste, but something much simpler. Clout. Not who I fuck, or who fucks me, but who will pick up the phone when I call. Who owes me favours. This is what a label refers to. Now to someone who does not understand this, ‘homosexual’ is what I am because I have sex with men. But, really, this is wrong. Homosexuals are not men who sleep with other men. Homosexuals are men, who in 15 years of trying cannot pass a pissant anti-discrimination bill through city council. Homosexuals are men who know nobody. And who nobody knows. Who have zero clout! Does this sound like me Henry? …
And what is my diagnosis Henry?
H: You have AIDS, Roy.
RC: No. AIDS is what homosexuals have. I have liver cancer.

Perhaps the most lingering question of all is that the majority of Roehmosexuals seemed to align with the Conservatives and Republicans who waged the war on gays about gay marriage, family values and all that shit -- why?

And not only that, it was mentioned that Roy Cohn's parents are liberal Jewish. They were very liberal. What happened to Roy's antics? There is a pattern amongst the self-loathing Roehmosexuals who tends to side with Conservatives after growing up in a Liberal household. I told Beth on the IM today that it seemed to me that ... liberal houses breed the troublesome Conservatives -- why is that?

I'm sure there are many more. Care to list them as well?