Detroit, Michigan -- Last Sunday, my friend videophoned me and Gus to tell us of this horrible news. Jason and his twin brother was trying to haul Jason's king-sized mattress from a friend's place to his new place.

They were struggling to place it on his friend's truck -- suddenly, it started to rain. They panicked and decided to drive ahead, without the ropes -- figuring that the mattress's weight would battle against the winds.

Somehow, Jason's friends decided to use Interstate 75 highway instead of the back roads because of the incoming rains, Jason was in other car and tried to flag it down ... but the traffic was heavy -- the winds blew the mattress off the back of the truck as it hurled towards Jason who was driving right behind the truck -- Jason ducked on the right as the king-sized mattress landed on the highway -- a Volkswagen Beetle right behind Jason's car did not duck as it inadvertently got on the top of king-sized mattress and got stuck on it.

Drama, drama. The traffic came to a screechingly stop. Sure enough, Jeremy and Jason attempted to rescue the mattress and the VW Beetle -- because the ladies does not want the cops to come because they lacked car insurance -- so they had to struggle and free the estranged beetle from its prison with the mattress.

Sure enough, with some help from others, the VB Bettle was freed -- and Jason has the destroyed mattress to prove it. 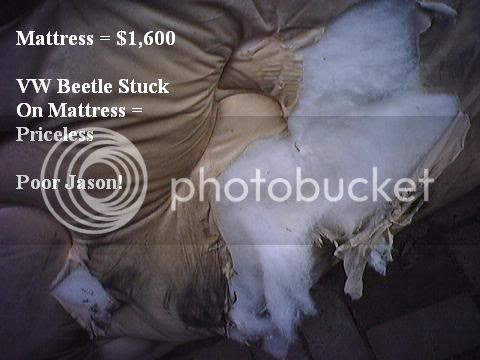