As many of you knew, the USS Challenger were destroyed on January 28, 1986 when the booster failed to perform correctly about 73 seconds after the takeoff, killing all crews including Christa McAuliffe, the teacher from New Hampshire who was chosen by the NASA to explore the space as a schoolteacher. 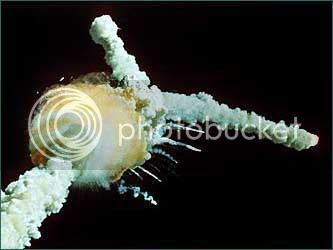 I stumbled upon two essays in The Virginia Guide by Mark Fletcher and Darrell Drake, both alumni from VSDB and Gallaudet -- they wrote this essays about two years PRIOR to the Challenger Disaster ... I cannot help but be amused by that. Here is the first essay of two. Enjoy.

One morning the bell had rung and it was time for all the students to hustle to their classrooms. We sat in our desks. Mrs. Garber came in. We were very quiet. She said, "I am giving you a break while I correct your papers." I asked Mrs. Garber, "May I read your newspaper?" She said, "You may read but be quiet." I looked at the front page. The headline said: "Reagan's Recommendation." Reagan's recommendation was to have one of the teachers into space with the astronauts. After I read the article, "That is a good idea", I cried. The teacher said, "Be quiet, please!". I tld my classmates all about it. They said, "Yeah, that's a good idea."

She was sleeping then, we put her in the box. We sent her to NASA. When she rode in the space shuttle, she was very nervous. Two weeks later, the substitute teacher came into our classroom and she said that Mrs. Garber would come back next month. We were so excited that Mrs. Garber would not be here for one whole month. But something strange happened. The door was slammed against the wall. "All of you are in school suspension," Mrs. Garber said. Mrs. Garber acted very insane. Her hair stood upward and her eyes were real wide open.

We are now in the principal's office for one month. We are feeling very sad.
-Mark Fletcher

Note: Mrs. Garber is hearie. The writer is Deaf. Go figure.
Posted by Ridor at 1:56 PM