I am sorry, Ty. I kinda forgot to mention the special friend of mine whose I knew from college days. Ty and I seemed to have a good relationship throughout our college years -- there is no reason for me to be annoyed by his presence. He was charming, smart, funny and easy to talk with about anything else.

For many, Tyrone seemed to be "hot". I knew many people drooled after him, I thought he was charming but not my type. I guess he probably felt relieved by that! However, when we graduated from Gallaudet, he was talking about what to do with his life -- I vividly remembered telling him that I read an advertisement about a role to perform in DeafWest Theatre. He said he heard about it -- I told him that he'd fit in easier than committing a sin. 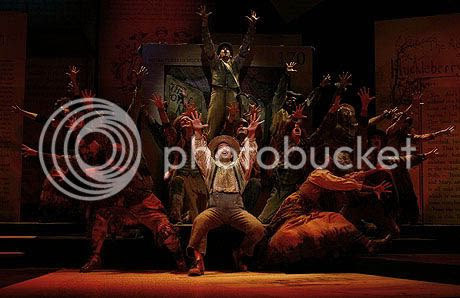 Big River
Little did I know that his performance in Big River eventually brought him to Broadway in New York and since then, his acting career went up and up and up ... I am extremely proud of him and happy for him. I occasionally saw him in New York when he was in town, he looked good as ever.

He mentioned that he is involved with two films. Wow. I'm so happy for him. Tyrone deserved all of this successes.

He can be seen in movie theaters where Ashton Kutchner played, "A Lot Like Love" -- Tyrone played as the deaf brother of Ashton's character. Heard from friends that it was good! That it did not look down on Deafies' tendencies. One said that he was stunned that Tyrone not played small but pretty large role throughout the film.

He will be in another film with Diane Keaton called "The Family Stone" which I do not know when it will release.

Ty the Charismatic Dude
Ty, you rock. You're going where not many Deaf men did -- for that, we thank you for being a role model. Love you lots, Ty.