It was 11 AM EST, I was sitting in the cafeteria yakking with the friends from Arkansas -- which is why many people sometimes asked me if I attended Arkansas School for the Deaf. Such an absurd logic, really.

I wanted to get the second serving of whatmacallit food in the cafeteria, so I stood up -- I saw the TV SPECIAL REPORT interrupting the wildly popular show, "Jerry Springer Show". It was the live broadcast of destroyed skyscraper, with debris all over the place. The captions were not on, apparently they seemed to scramble to get the captioners on a while later after the first broadcast. So many Deaf students were left to guess what is going on with the image of destroyed skyscraper with heavy, black smoke billowing rising into the sky and seeing people running around. 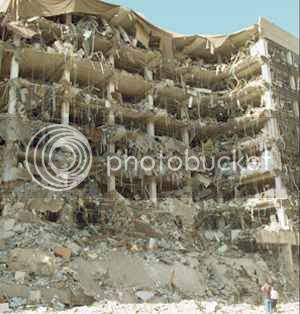 I smiled, "Not another Tel Aviv shit."

When I got the second serving on the plate, I went back to the table and was stunned when it mentioned: Oklahoma City. What the fuck?

The reports immediately cried that the Muslim terrorists had to be the one. People were pleading to calm and not to jump the gun. The media went nuts when the Christians claimed that it was Muslims.

Turned out it was us who produced our own American Terrorist who bombed Alfred Murrah Federal Building in Oklahoma City in response to the way they handled the Xian fanatics in Waco, Texas which ended in a huge bonfire for these dumbfucks, good for 'em.

Guys, guys -- Tim McVeigh was not Arab. He was not Muslim. He ws white trash. He was Xian. He was the classic American conservative who believed that the government should not interfere in our lives. He was the conservatives' true Terrorist! 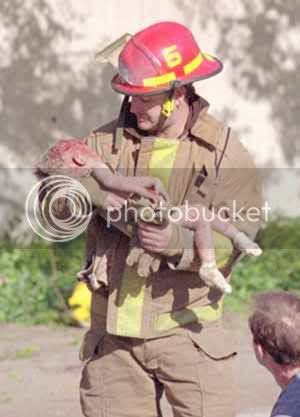 A Time To Examine Ourselves
Oh, yeah, later in the summer of 1995, I drove through Oklahoma City on the way to Los Angeles, Richall and I stopped by and visited the bombing site. We were chatting and hanging out at the clean-up site -- of course, we were bit morbid and cynical about it. The folks at the dry cleaning store right across the street saw us and the owner came to ask me and Richall to join her for lunch in the store and talk about it. We did.

That's how nice Oklahoma City can be, if they wanted to be. Maybe it is a blessing in disguise -- be nice to everyone else or you'll be ka-boomed.

Thanks to the lady for her generosity in Oklahoma City. Never knew her name, though. But will never forget the lunch appointment.