Test the Potomac & Hudson River! This article said that the Po River in Northern Italy which goes through Milan and Turin, was tested positive for cocaine. How? Apparently, lots of people snorted then later, they piss in the urinals which led the urine into the sewage and into Po River. Cool. They need to do the same thing in Hudson River and Potomac River -- I'm sure it will go off the charts.

Licking The Blood Wounds Is No-No! In Bend, Oregon -- a football coach was reprimanded by the school board for licking a student's bleeding wounds. Too bizarre for my taste.

Now There Is Jewish Terrorist? When this particular Jewish person decided to shoot 4 Palestinians, that was an act of terrorism but the news was quickly subdued and the focus shifted from him killing four Palestinians to his being lynched by the Arab residents. Why change the focus? Whose fault was it?

Conservative Crybabies! Did you hear about Robert Novak? The conservative commentator for CNN snapped at Democrat James Carville during CNN's "Inside Politics" and walked off the set during the live exchange on TV. Was it the Conservatives, for years, who lambasted at Liberals for being a crybaby? Look at Robert Novak, he whined like a fucking crybaby. Grow a spine then come back. On second thought, don't come back!

No Ronald Reagan Boulevard! Enough is enough. Ronald Reagan is NOT the God. Ronald Reagan caused the deficit to balloon during the Cold War struggles. Ronald Reagan, contrary to the popular beliefs, did not end the Cold War! When the union for commercial planes called for a strike which many flight attendants, pilots, workers associated with airlines walked out -- Ronald Reagan had them all fired and replaced. Suddenly, the pathetic Congress insisted that we change the Washington National Airport to honor this fool! The unions represented the true Americans, not Reagan! Then there is this stupid International Trade Center on Pennsylvania Avenue NW which the Congress insisted that it be named for Ronald Reagan. Now the Congress are working on a bill to rename the 16th Street as Ronald Reagan Boulevard -- and guess what? The DC residents does not want it at all. It is their town, not the Congressmen's towns.

My Sister's Drawing: I was cleaning up the books in one of my boxes, I stumbled upon the old issue of The Virginia Guide and saw my sister's artwork -- I thought I'd share this with y'all just to lighten up the moods. Enjoy! 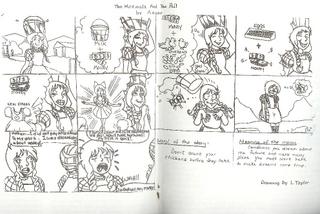