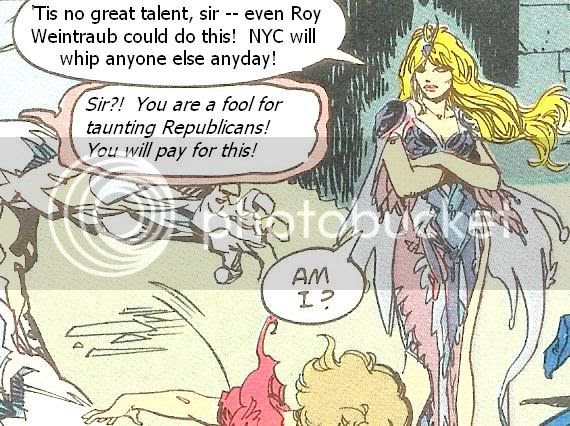 According to this website, Ann Coulter, whose her gender was questioned a while ago, mentioned on the FOX NEWS Cable Channel that if Islamic Terrorists attacked New York, New York would have surrendered, just like that.

This bitch is nuts! She claimed to reside in New York but she obviously limited her means of transportation in Upper East Side. Outside of Upper East Side, there are many groups that would go out and destroy the intruders who dares to mess with the way of life in New York.

How? We have Italian Mafia. Russian Mafia. Orthodox Jews. Puerto Ricans. Gangs in Harlem. Dominican Republicans. Gangs in The Bronx. Gangs in Queens. Bad-assed gays & artists who are very protective of their arts in East Village. They won't surrender at all. These folks knew the city better than anyone else -- they'll kick anyone's ass before they attempt to overtake the city. Why do you, Ann, think New York is the greatest city in the world? Because we have these people to back it up.

Ann needs to have her face disfigured permanently.