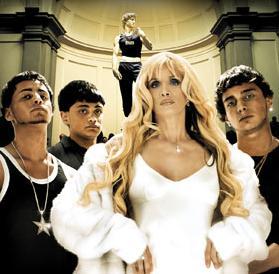 Gotti Brothers: When I heard of a reality show on Victoria Gotti and her three sons: Carmine, Frankie and John. My eyes rolled. But when I finally got a glimpse of them on TV recently. These boys are quite handful for Victoria -- I cannot handle these pesky but yet hot guys. Carmine's eyes are hot, Frankie is so sensitive, and John being macho is so cute -- but together, they make things more volatile than necessary.

But either way, it is fun watching them whining. Especially when Victoria ordered her boys to go fishing and camping -- the boys, perhaps sensed that their metrosexuality image is being threatened, barked viciously with lots of profane words that makes me laugh so hard. But as always, Mama Gotti wins. Off they go ...

I do not think I would want to date these three guys but I would fuck Frankie if given an opportunity! I'm not sure how old these boys are -- if they are underage, my immediate reaction would be: SEE YA LATER! Victoria Gotti is a mother I'd love to have -- I mean, it would make my life ... so convenient, really. 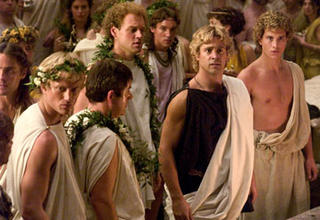 Colin Farrell! God, I hate Colin -- actually, I love Colin so much -- I want to fuck him a thousand and one! But he is so fucking cockteaser. He, like me, loves sex. It is in our nature to enjoy sex and so on. I finally saw Alexander tonight where Colin Farrell flashed his ass several times, and him making out with three men ... that was hot. But the film really sucked.

The battle scenes were pretty lethargic at times. I'm like, 'Okay, next!' when they showed excessive gore of violence -- it is annoying that you can see Hephaistion's love for Alexander (and vice versa) on the film but ... not much was touched. Probably because they were afraid of offending people who thinks being gay is bad.

Hephaistion, performed by Jared Leto, his devotion to Alexander was plainly hot. I was hoping for one final, massive tongue-in-tongue kiss -- but that was not to be.

Time to chase after that Blevins guy. He's mine. Men, can't live or without them. Especially hearing ones. But with Blevins, I'd do everything from the top to the bottom. And he shall scream when I'm done with him.