I know you guys do not care about the sport but I do. I'm looking forward to the new season, the new era, the era that will bring the national championship to Virginia since we got rid of losers and is bringing new players in.

The season, in my opinion, is very challenging for a team that has only one senior and for the team that lost 5 seniors -- these 5 seniors are the group that lost more games than anyone in the school history. They compiled the miserable 68-54 record in 4 years, simply unacceptable. 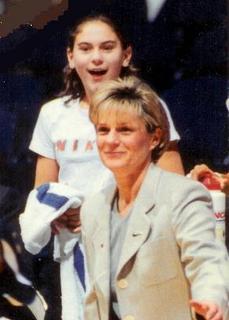 In November, Virginia Cavaliers will play at George Washington in Washington, DC and in St. Thomas, Virgini Islands where they will square off against Alabama. If they win against Alabama, they will play Minnesota, the same team that eliminated the Cavaliers from the 2005 NCAA Tournament. Only one home game will be featured in November versus Wright State.

So it is easy to assume that I will be in DC on November 17th to 20th. It is a must, for me. Merritt, Travis, Manny or Burke -- host me on that weekend? Lambykins, wanna date? Sonny, convince your wife about Virgin Islands! Time is running low.

In December, Virginia will play Harvard and Marshall at home in addition with its own tournament where they will host Boston University, Holy Cross and Yale. Their two away games will be at Seton Hall and Richmond.

It is interesting to note that Marshall is the only school in its mid-major conference I had been following ever since the program signed and brought a deaf player, Ida Dotson, to play for Marshall. Ida Dotson is 2-time Gold medalist for Deaf USA Women's Basketball team, thwarted Sweden's hopes to dethrone the hold on Gold since the first Gold Medal game of Deaflympics Women's Basketball. No, Ida already graduated from Marshall two years ago.

In January, Middle Tennessee State and at Marquette are the only non-conference that will play against Virginia -- then it is all about the ACC, what a brutal schedule -- Florida State twice in a month, NC State, Virginia Tech, Maryland, Miami, Boston College! Boston College is the newest addition to the ACC slate.

For sure, on February 5 is the date that I will return to DC to watch Virginia taking on Terrapins. Perhaps, Darlene and I will heckle at each other at Comcast Center. Coach Brenda Frese is cool woman, she is going to take Maryland to high heights -- I'm hoping that Virginia gets there FIRST!

So I boldly predict that Virginia Cavaliers will finish the season at 26-7 and a return to the Sweet Sixteen in the 2006 NCAA Tournament!