Maybe It was Not The Cats! Check this out. It brought a chuckle out of me. Hat tip to Philip who sent me the link a long time ago.

Pet Contest! Perlis suggested to me via the email that I have an entry once a month that focuses on our readers' pets. I think it is wonderful idea. What do you think of her idea? I probably will post 5 pictures per entry once a month. The deadline is September 1st. It will be posted sometimes on the first weekend of the month. Fire away and email me at Ridor9th@gmail.com

Washington Blade Fell To Its New Low: Chris Crain, the Editor of Washington Blade, has stooped to a new low -- by hiring a prostitute to write the columns for the magazine. This particular former prostitute who once worked in White House, Jeff Gannon / Jim Guckert, is now penning for Washington Blade. This just proved what I always said all along -- that Washington Blade is irrelevant paper to start with.

Writings On The Stall: When you go to the public bathroom to crap or to piss, do not lie to me that you do cruise the toilet stalls for some funny comments. I do. I love the one where it tells you to read the comments near the floor -- when you had to leave the toilet a little to bend down to read the tiny words -- the comments read, "Watch where you piss." Stuff like that made my day. Hat tip to Philip for the link.

Another Boy Scout To Be Reviled: This guy was an official of local Lutheran Church, active in the Boy Scouts and was married to a woman with few kids. And managed to find the time to fuck, kill and abuse women in different places including at his church. The BTK Killer, done by Dennis Rader of Wichita -- the same town where one of my LW3 compatriots hailed from -- was sentenced to 10 life sentences in the prison, he'll never see his freedom. But remember one thing -- he commented, "People will say that I'm not a Christian, but I believe I am."

Remember, it is between God and Dennis, not James Dobson or any Christian can judge Dennis' actions. But the point remains the same -- he's part of Boy Scouts. Another reason to keep away from these bad news group. 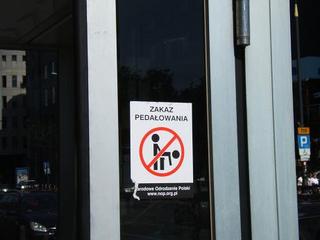 Guess Sex Is Rampant In Poland: A friend of mine from Riverside, California emailed me that his friend snapped this picture in Warsaw, Poland. The poster was issued on the exterior wall of the phone booth.

Apparently, sex do happens frequently in the phone booths. How typical of Polish folks. Did you know that this is the same town that condemned gay pride marches. Maybe it has something to do with this. Any further information on this amusing picture will be appreciated.

Another Idiotic Quote by Pat Robertson: "The feminist agenda is not about equal rights for women. It is about a socialist, anti-family political movement that encourages women to leave their husbands, kill their children, practice witchcraft, destroy capitalism, and become lesbians."
-- Pat Robertson, fundraising letter, 1992

Gay Day at Phillies Game Marred by Anti-Gay Folks: In Philadelphia, there was a baseball game that hosted the Gay Community Night. Thousands of fans, including gay fans, came to watch the game. Michael Marcavage, the founder of RepentAmerica, has the right to protest his anti-gay rhetoric but why must he choose the same date on that particular night? Michael Marcavage and his cronies seemed to follow the gay people where they go. Protested at different places where gay events took place, the protests became a form of harrassment.

They can protest on any date but why did they choose this particular date just to antagonize the good gay people who came to enjoy the game? I am willing to bet you a dollar or two that Greg, the loony Xian prick on Rhymes With Right, would dispute that it is not a form of harassment. If it is not harassment, then it is stalking.

Michael Marcavage, your message does not work -- get a life. Go and flip some burgers, please.

But He Is Air Force Reserve Lieutenant Colonel! If this guy really hated GW Bush, you think he is the *only* one in the Armed Forces that hated GW Bush? Trust me, there are many. I already met some soldiers who rolled their eyes at the mention of GW Bush. It is that bad.

An Update with Mordru The Terrible: Mordru will not make its first appearance in JSA #79, in fact, he will show up in JSA #78 -- the last time he made such an appearance was in #51 when he was imprisoned in the Rock of Eternity. According to DC Comics, here is the hint:

A DAY OF VENGEANCE tie-in! The JSA desperately seeks Dr. Fate to help them find the missing Jakeem and Thunderbolt. Meanwhile, as the Spectre's rampage continues, the team's greatest enemy has found the opening he needs to destroy the JSA once and for all!

Again, Mordru rocks!
I think I said it enough for the day.