Last February, I wrote this entry because I wanted people to know who Sue Gunter is. She is exceptional woman in her own right. She made a huge impact on many players, especially with the inner-city women. 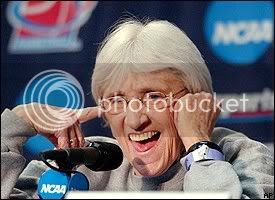 Not only that, when she was diagnosed with Emphysema two years ago, she did not hesitate to turn her program to her assistant coach Dana "Pokey" Chatman, a female African-American who did not blink her eye in the face of adversity as she took the team to win the SEC Championship by routing Tennessee Lady Volunteers and plowed her way to the school's first Final Four appearance. The most recent season, Dana once again led the school to its second consecutive appearance in Final Four where they were upset by the upstarts in Baylor.

Sue Gunter, the Basketball Hall of Fame Coach, has died at the age of 66 this morning in Baton Rouge, Louisiana after a long period of battling Emphysema. 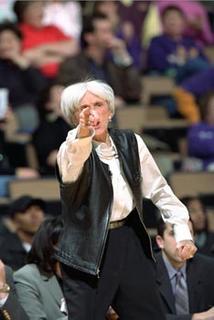 Sue Gunter was and is still the influential woman and a true pioneer in making what the sport is as of today. If not for Sue's trademark frantic defensive pressures, there will be only one team that could plow anyone else in the nation -- that is Tennessee. Sue managed to exorcise the Hell out of Pat Summitt's Lady Volunteers year in and out with the limited talents Sue could use.

By seeing Sue Gunter making the use of limited talents, it gave the sense of hope to many players who could not play for Tennessee but against Tennessee. The result is that many players are able to choose different schools instead of going only to Tennessee. 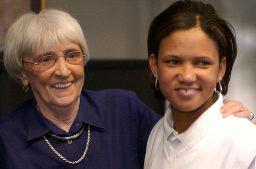 One word: Parity. Sue Gunter was not the only instrumental coach that brought the parity to the sport but she certainly played a huge role in this manner. She managed to keep Seimone Augustus home away from Tennessee's lure.

Sue, you did a great job. Nobody in the sport will forget you. Rest in peace, Sue.

Here are few pictures of Sue Gunter in action. You can see how intense she is when she is coaching Louisiana State University Women's Basketball team. 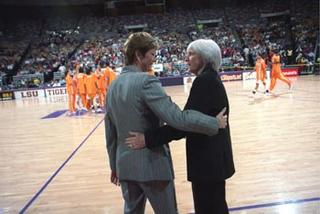 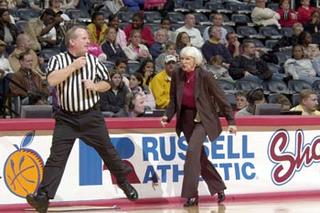 "Damn you, Zebra! Here is my Cajun stare!"