I guess, it is appropriate thing for the management to dismiss someone based on the alleged behavior of a player because it reflects the team, right? What about Kobe Bryant of Lakers? He did not get dismissed at all -- in fact, he was accused of raping a woman in Colorado at the same time that Latasha Byears was accused of. And the management protected him at all costs despite the fact that Kobe drove many players off the team i.e. Shaquille O'Neal, Karl Malone and few others. Whereas Latasha Byears was pretty popular with her team. Why? Because Latasha is an all-out Lesbian, Kobe is marquee player. Is this right? You can read about it on LATimes.com but you'd have to register the bullshit to read it.

Don't You Hate It When ... : A friend of mine from California told me that when she flew to San Jose from Maui, Hawai'i, she watched a film on the plane which featured our friend, Ty Giordano in A Lot Like Love. She was furious that the film was not captioned. She attempted to ask the flight attendant who came up with lame excuses that they do not have the equipment.

It reminds me of one I dealt with when I flew to Los Angeles, I asked the flight attendant to turn the captions on as I can see where she meddled the box that handles the TV and VCR, know what she said, "But the captions offended fliers, we do not want to offend them. Sorry."

That pissed me off. How dare of her! I rather to crash the plane than to endure the lack of captioned films on long trips. That, having to watch the uncaptioned film, is a form of torture, in my opinion.

This Is Priceless: Click on the image to read the dialogue. Totally funny.

Look At Bright Side: At least, by doing that, he is telling us that we can be sexually active at that age, right?

Coach Huggins Fired: In Cincinnati, the controversial coach at the University of Cincinnati was fired (depends on your perspective) after the ultimatum from the President of the University. About time if you ask me, but why is that the timing so late? Bob is famous for berating anyone else that comes in his way for years, coddling his players who broke the laws and decency at times and yes, he was also arrested for driving under influence last spring. Why did it takes the university to issue an ultimatum yesterday after many months?

Gallaudet Gets New Coach: Oh, lord. Not many Deaf schools fielded football teams thanks to the dwindling numbers of students as well as the cutbacks of state funds (Fault? Hearies, always.) as well as many deaf children going to the mainstreaming schools where they were often ignored by the coaches (unless they are massive big, extrardinary athletic players to start with) and left on the benches -- Gallaudet routinely gets smaller, thinner or out-of-shape football players to play for the team.

Gallaudet has descended from the Division III status to the club status over the time. It is a proof that the sport is dying amongst us all. For years, Gallaudet Athletic Department and that wacko Barry Strassler has been saying that the football team will be back to Division III and compete better. 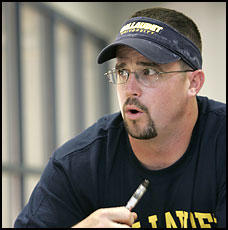 They just hired a full-time Head Coach, Ed Hottle (He's HOT! Whoo! Whoo!) for Gallaudet football team. I think it is all right with me. But I"m skeptical. I'm realistic. I look at the rhythm of deaf schools and mainstreaming schools where Deaf children are being used to play sports -- very few schools like Maryland, California-Riverside and Texas can routinely send the best players to Gallaudet. But what else?

I have a close friend who is now working with the team at Gallaudet, I wish him the best. He deserved it all the way to the bank. God knows, I love him. The bonus of everything is that Ed Hottle is hot as well. But I just cannot fathom the idea of seeing Gallaudet football team doing well these days, not with the fact that the players are withering in comparison with another Division III team, Bridgewater College's roster!

Why did I mention Bridgewater? Because a long time ago, Gallaudet played them! But not these days. The team simply cannot compete, thanks to circumstances at deaf schools and mainstreaming schools that left them sparingly small to do the best they can. I wish the coaches better in their quest to return to the Division III status -- but you know, there is no shame in exiting the back door by folding the whole sport.

Yes, it was Gallaudet who reovlutionized the huddle before the play, but honest to God, does the Southern Cal team cared? No, not at all. I daresay that Matt Leinart will not know that the huddle which was invented by Gallaudet to shield the hearing opponents from reading their signs in late 1800s. Yes, Gallaudet's football team is more than 100 years old. Yes, the sport has many stories -- I still have the Centennial Anniversary of Gallaudet Football somewhere in the storage bin. I treasured it very much. But for our dignity and pride, let's exit the back door rather than dealing with 70-0 blowouts in every game like Praire View A & M University did a while ago.

Some said, if we do not have football team at Gallaudet, we will not survive! Come on, look at George Washington University. No football team needed. They're doing fine in many sports. If they can, so can we. Let's preserve our dignity by exiting the back door. Unless we have a sudden surgence of Deaf births and so on, then we can resume this. But at this pace, it is going nowhere.