To Amuse Y'All Part 2

I had been travelling to many states, I crossed the country back and forth twice. Where do I think has the intersection that impressed the heck out of me when I first saw it? It has to be biggest, wildest and tallest intersection -- you swear that they probably built these for no particular reason other than to make it convenient for the drivers to go around.

The best intersection, in my opinion, goes to the Interstate 105 & 110 in Los Angeles. When I first saw it, I was horrified at the magnitude of that intersection. One leg of the intersection goes as high as ten stories high! IN fact, when I realized that the exit I had to use goes on that leg and I drove on the overpass, I breathed and thought, "What if the earthquake occurs right now, will I be tossed over the overpass bridge?"

But I found out that in California, they designed one-leg per platform for the bridge to allow it to swing back and forth without causing the damages. But I wonder whether if it will also prevent the speeding cars from flipping over the overpass bridges as well? Naturally, I slowed down and became intrigued with the mess of overpasses -- it is easy to take a wrong one and you're done deal. See you in San Diego or in Riverside, really!

Here is the picture of the best intersection I ever had saw in my lifetime! Dig it for yourelf. Boucher and Silas, agree with this? 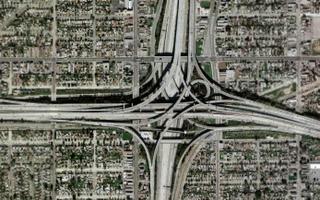