Few Nasty Stuff To Knock You Out! 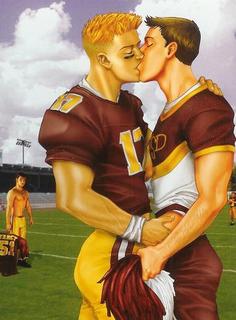 Irving's Flaccid Monster: A friend of mine who is heterosexual, told me that he is not ashamed to compare his penis with anyone else's penis. He said it is very normal to do that which I agreed with him 100%. Too bad, not many heterosexual men would admit that they do check men's packages to compare with themselves.
Anyway, my dear friend told me that he walked in the shower area where he saw this well-known person sporting a massive 7-inch flaccid monster. Suffice to say, he was in state of disbelief but covered his shock(ment) very well to a point where he exclaimed to me via the IM that the President of the local university is hung like a horse! I had to reassure him that being big at flaccid does not mean that it will spring a longer one -- it probably will inflate only, whereas some men has 4-inch flaccid dick but spring more than 7 or 8-inch dicks. So it is possible that this gentleman who leads the university has big one but it is ordinary one by any means -- I hope it is, for God's sake!

Speaking of Penis! Jeff Carlson can vouch this for me. This happened in Dr. Sharon Barnartt's class some years ago. Her class lectures can be so boring. Tiresome at times. I decided to walk out of the classroom to the bathroom to piss and throw some cold water in my face in Hall Memorial Building's south wing.

You know the bathroom in south wing has the handicapped bathroom on the left when you enter the bathroom -- I pulled the door open only to have it pulled back so hard that it slammed so loud.

There was a guy inside with his pants down wanking himself off. I was speechless. I only saw his pants down and all that, I could not see his face -- he managed to close the door so fast that I could not register who it was. Needless to say, the incident jolted me wide awake and went back to the classroom -- Jeff saw my wide-eyed face. He plied incessantly to tell him what happened.

You should see how she signed that word. Jeff and I, along with everyone else in the classroom, nearly died of heavy laughters.

Football Season Is Coming! I enjoyed the college football season more than the NFL has to offer. I thought it was fitting that I insert the hot picture of a football player making out with a male cheerleader -- would that be a sight to behold in some Nebraska high school football field? Probably never in my lifetime.

Two So Far! It is interesting to know that not many people knew that they are offender of some sorts! A friend emailed me to check the link -- and I did follow up on this and over there. Interesting tidbits, though. But you are not allowed to intimidate, harass, threaten or harm these people because they *already* paid the price for this. This is public information -- and unfortunately, we can access to this information by any means.

Update: I neglected to mention that the offender on "this" link is also the die-hard Xian of Mark Wood's Cult. So much for "noble duty before God".