Carrie Has Vanished! Last week, I finally got in touch with Carrie who told me that she has been vacationing in Maui. Maui?! Yep, that Hawai'ian island. Carrie, I'm still waiting for these X-Mas pictures that you took when you were here with me and Perlis!

Dan Savage: I forgot to mention that Andrew Sullivan, the conservative Republican HIV+ barebacker out of Provincetown who always asked people to donate money on his blog, has invited Dan Savage to pen in for his blogsite this week. This is remarkable because Andrew is conservative Republican, Dan Savage is liberal as things come by. Dan Savage is famous for issuing advices related to sex issues. I read his sex articles because it is funny, educational and yes, I learned some stuff out of it. Now Andrew's blog is more lively and funny, which I cannot say the same thing for Andrew Sullivan himself.

Dave Chappelle Rocks: Last night, I could not stop laughing. You know how they say, laughter is the best medication. Dave may be the funniest comedian I had seen in years. I understand why he signed with ComedyCentral channel for some millions of dollars to continue his comedical career. If you did not get to see it, try it. You'll be pleased with how he says things about ourselves -- unless you're a prick and cannot read the captions very well, then don't bother to watch. 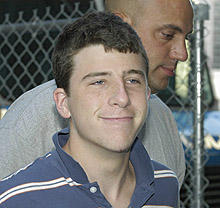 Scott Harper Is Village Idiot But ... Scott Harper, 18, is termed as the village idiot when he decided to jump off the upper section of Yankees Stadium and landed on the net which I reported few days ago. Well, there is a picture of him up close -- he's cute. Dreamy but too young. He's the type that I see at The Cock Bar which I can loiter, fuck and dump just like that. *growl*

Which One Are You? Blanche Devereaux, Rose Nylund, Sophia Castillo or Dorothy Zbornak? I'm the classic fag. Any fag loves this show. Sitting in the kitchen at 4 AM with close friends and eating cheesecake, talking about their lives -- listening to Rose's St. Olaf stories, what more do you want? I can relate to Sophia -- her dry, abrasive and blunt sense of humor is duly noted and very familiar with me. In fact, I can watch her and expect her to say something else to subdue everyone else in the room.

Malkin, Drudge, LGF and RWR: When Cindy Sheehan asked for GW Bush to come out of his reclusive Crawford Ranch for few minutes of talk, to have the normal conversation. Show some compassion for the mother of a dead soldier. After all, he is on his 50th vacation in 5 years (10 per years!), he said he wanted a vacation to "reconnect with his folks in Texas" -- this is his chance to be normal and be civilized. Apparently, no. GW Bush dispatched his supporters like Matt "Roehmosexual" Drudge, Michelle "Chink Bitch" Malkin, Little Green Snotballs, that nobody's prick, Rhymes with Right to assault the mother of a dead soldier of her simple request to meet and talk with GW Bush on a casual level.

It is interesting to note that these people did not mention that the secret service agents made an indirect threat that they will arrest the mother because she is the "threat to the national security". Wow, GW Bush is the national figure? Please!

That Roehmosexual, Matt Drudge did this on persistent level, obviously because he regarded her as an annoyance that can bring the downfall of GW Bush's popularity. His current polls are at an all-time low, which is good for me.

That "Chink Bitch" Malkin had the guts to speak for Casey Sheehan, Cindy's dead son -- she said that Casey would be embarrassed of his mother. Excuse me, Michelle, you do not know Casey like Cindy does -- you just write and spew your fucking dumb-ass rhetoric, claiming to speak for people who has nothing to do with you!

As for RWR, he is just an idiot from Texas. Simply put. He claimed that GW Bush did meet Cindy last year. Yes, in front of media! In front of hundreds of persons, but not one on one. Compassion! Compassion! Franklin Delano Roosevelt did it. Abraham Lincoln did it. JFK did it. Bill Clinton attended the dead soldiers' funerals. Did GW Bush? No. GW Bush joked by calling Cindy, "Mom" and even asked his assistant, "Who are they?" -- implied that GW Bush is a buffoon and do not care at all.

GW Bush and his Republican cronies knew the art of media, thanks to the Nixon debacle, to use against the mass. How? To pretend. To stand and pose for 5 minutes so that the pictures can be taken, then when it's over, the families are out due to the "national security". No time for a normal conversation between a true citizen and the nation's President. But he has time to have 50 vacations in 5 years. No conservatives and Republicans will disseminate why GW Bush has 50 vacations in 5 years, but they are willing to destroy the grieving mother of a dead soldier.

How great is it?