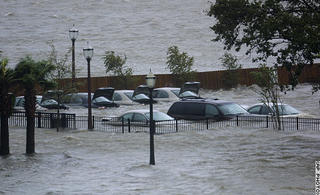 I was surfing the 'net and saw this picture -- it made me wonder. Why are the cars' trunks open? Is it a new safety feature that pops open under pressure? 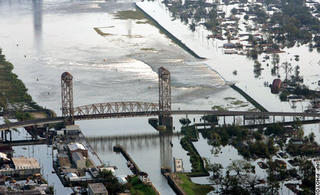 Here is the example of levee being breached. It is not small. It is huge one. 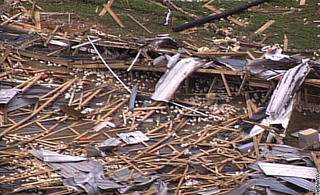 This is interesting, a tornado touched on a chicken farm in Georgia, probably sending thousands of white dots in the air for a little while. It'd be funny sight to behold. For sure, this place stinks! 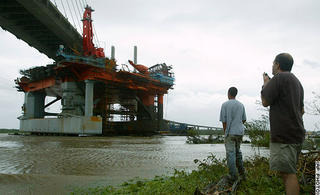 Wow, the oil rig is stuck under a bridge in Mobile, Alabama -- it was pushed by Katrina into the bridge. It only takes 145 MPH to do that.

GW Bush flew to New Orleans. He looked so gay when he stepped out of Air Force One with his ugly dog in his right arm as he walked to the helicopter to survey the damages in New Orleans. He boarded his dog on the helicopter. Sounds like the exact thing that Merritt Holloway would have done, right?

Here is our local idiot, Michael Micaravage, the leader of RepentAmerica who harassed gays for years -- he said that God destroyed New Orleans because of gays. Who's next? Anyone to wage bets who will say the most stupid things in the coming days to lay the blame? Only time will tell.