Another Proof Of Xian Extremists: It happened in the heartland of America -- in Westmont, Illinois. The Xian Extremists do not kill, they torture by harassing others if they do not comply their wishes. Check this out for the proof.

A Soldier Wants To Beat Up On Coward GW Bush! This is interesting stuff. The question is, will this guy be charged for treason against the country for making a threat like that? Probably.

Queer As Folk No More: Several of my straight friends enjoyed watching the soap opera of Queer As Folk where we get to watch Pittsburgh's own Brian Kinney fucking everyone else out of their brains meanwhile we get to love Brian's best friend, Michael Novotny for his laid-back and dreamy attitude. Then we get to wish that our mothers are like Michael's mother, Debbie Novotny. And who does not have a feminine faggot to hound the gang well as can be like Emmett Honeycutt? Of course, there is always this wallpaper guy that feels inferior when he goes to gay bars/clubs in Ted Schmidt.

In fact, nearly all of my straight friends already saw at least ONE episode of QAF. I knew of a heterosexual man who purchased *all* seasons of QAF and is enthusiastic about getting the final season.

It was supposed to end after four seasons, but the show was so successful that they extended it for one more year as well as including Rosie O'Donnell to perform in the show.

Last Sunday marked the finale show of QAF on Showtime. Some said it was so-so finale. I'll wait for my heterosexual friend to get the finale season of QAF on DVD and start watching. Know why?

It seemed to me that QAF seems to have bad captions when it is on Showtime Channel, often comes up with jumbled words that I could not decipher. Maybe the Al-Qaeda folks has better way to decode the messages? I have no innovation to be patient with these jumbled captions at all. That's why I rather to wait for the complete sets of QAF DVD seasons.

What do I think of the show? In general, nothing that they did surprise me. What you saw on it, I already go through that. Some as a participant, some as a spectator. 'Nuff said. But they got great actors in Hal Sparks, Peter Paige, Robert Gant and Sharon Gless. 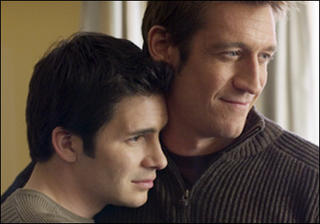 Hal Sparks played as Michael Novotny who is romantic hopeless and was swept by hot, charming man in Ben Bruckner played by Robert Gant. In real life, Hal Sparks is straight single man who could do such a steamy gay sex that I had to mind-control my cock to go down. Later, Hal said that his former girlfriend told him that it'd be hot to see him doing things with guys on television. Hal went ahead. The result is that the QAF has more female straight viewers than any groups! 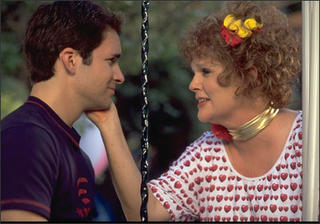 Debbie Novotny, portrayed by Sharon Gless, is everybody's dream to have that kind of mother. A mother who can love, support and defend you for who you are, not what you are. And be proud of it. In fact, Deb reminded me of Ricky Dockter's mother. I was blunt with him that I was envious of him after seeing his mother on the stage, boasted about his son scoring not one but two ... needless to say, Ricky was all beet red.

Emmett Honeycutt, portrayed by Peter Paige, is the kind of guy that I enjoyed associating with. Why do you think I hang out with Manny, Merritt, Toby, Mikey, Erik to name few? Because they can snap at their will and everything that straight men fought to preserve simply disintegrated.

However, Peter and I once bumped into each other right outside of DC's 30 Degree/Cobalt during the Capital Pride about five years ago. What happened was that I was on AOL Pager arguing with Mikey and Toby, trying to find where they were at that time. Apparently, Paige was talking to someone from behind as he was getting off the stairway as I was trying to reach the stairs to enter the premise, it was a fateful collison. I was jolted by that -- Peter Paige started to say, "I'm sorry!" in voice. My eyes widened and I smiled, I gestured that I'm Deaf. Peter started to sign some words, "ME SORRY, ME NAME PETER." 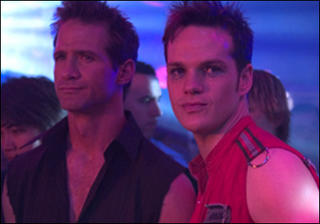 Really cool to know that Peter Paige can sign some words!

Peter smiled its famous one for me and nodded -- it was interesting to note that he lacked the gap in his teeth like it was showed on the QAF series. I told him that I do not watch it all the time but I enjoyed his works. Needless to say, my friends rushed outside to meet Peter Paige and took a picture -- I'm sure Toby has the copy of that somewhere else.

Perhaps the most enjoyable segment of all is Emmett's affair with the hunk who played a professional football team. Man, these fuck sessions are hot. You can see the picture of Emmett wearing red tank-top shirt with this hunk. This hunk is to die for.

It was a good run and bravo to Showtime for doing the bold thing to show the QAF as is without restraint! Of course, some gays will complain that the series is nothing but stereotypical. But who gives a fuck? It is called "entertainment", for the love of God.