One Step At A Time

Some thinks that I'm malicious. That is fine with me. Of course, at times, I get annoyed with that perception when people exaggerated and repeated this not for months, but for years! Yes, I have strong opinion, so do you. Or you should be. 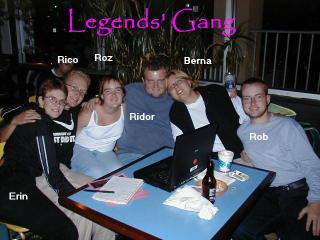 It is always blessing to have close friends who endured and weathered through the turbulent moments with me to a point where they now can say, "Oh, that is RT, I'm not worried about it."

There was three or four circles of friends in my lifetime -- perhaps the most eccentric group of all has to be the Legends' Gang. The Legends' Gang was coined by a stupid prick who emailed me and my friends, asking us if s/he could interview us about how they handled me! Of course, all of my friends refused. So we joked and named us the Legends' Gang. Among who's who are: 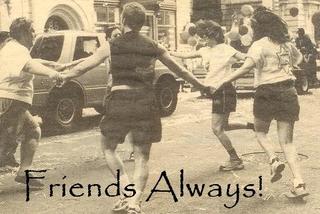 It would not surprise that you would recall seeing us chatting with each other at IHOP or Denny's Restaurant at 4 AM in the morning on a schoolday. Or even saw David pulling Berna's pants down at SoHo for the world to see. Or us arguing with the cops on the top level of parking lot at Stratosphere Tower in Las Vegas. Or just sitting in Gallaudet cafeteria talking for 3 hours in the same table. Or me trying to help David vomit the damned thing out at KonTiki Bar in Tucson, Arizona while everyone was too fucked up to take care of themselves. Or me arguing with a cop in DC while 9 of us were crammed in my tiny Ford Escort SE.

One time, we decided to head down to my parents' home for Labor Day Weekend, I knew my parents will say "No!" if I mentioned that 9 of us will come down for the weekend. So I said "4" but told the gang to come along. Two cars carried 9 of us to my parents' home. Suffice to say, Mom could not say "No!" in front of us. To make things fun, Berna, Keith, Rosalie, Nina, Silas along with a friend from Italy never experienced a hurricane or tropical storm before in their lives -- there was a tropical storm rolling in our neighborhood on a Saturday as we went to the water amusement park called Water Country USA in Williamsburg -- less than 10 people came to the park as it rained all day long. Of course, it is water amusement park -- so fucking what?! Water is water, period.

We had a blast time. The worst part is when we went back home for the night, we could feel the rains pelting my head all night long. It was worse than the Chinese water torture! When we went back to Gallaudet campus, many of my friends bragged that they swam while the tropical storm bulldozed around the neighborhoods -- in fact, it was reported that about 5 miles east of the water amusement park, a tornado touched down and obliterated an apartment building.

Europeans never experienced a tropical storm simply because it does not go their way, though. So when Berna and Danielle went back to Europe, they boasted that they weathered a tropical storm at the water amusement park -- let's say, the Europeans were amazed at their guts.

These friends got to know me extremely well to a point where they just nodded and rolled their eyes when people backstabbed or tarred my name. But not Keith, he just chuckled about it then tell me later about it so that I can laugh so hard about it. 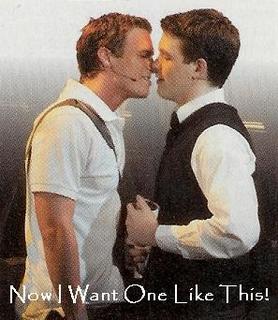 Of course, I have many friends that I could list. Beth and I had several amazing stories about this, that and there. Manny and Merritt probably has two or fifteen stories about me. Jason probably has 5 or 20. Friends are great, but there is always that "but".

But I'd like one guy to contend with. I'd like a partner. I'm 31. Everyone has so much to offer for someone to share with. It is human nature to be like that. I want one as well. I want to confide in one person, I want to tell him what I think, feel or whatsoever is on my mind. Of course, I am complicated as things goes. It takes one to know me. Nobody can know me overnight -- I'm sure my friends would vouch that for me as well. 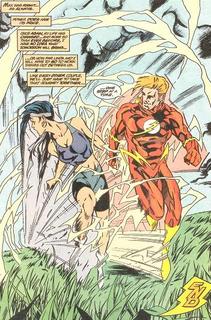 To make things worse, it is not easy to date a hearing person. Especially gay hearing man. They seemed to shut down themselves when they perceived me to be "complicated". Ahh. As for Deaf gay men, not many are my type -- that is OK with me but hey, how can you determine that I'm not for you if you do not know me well?

When I see this image of Wally telling his girlfriend, "...one step at a time." -- it strikes a chord with me. In this image (click on the image for a close-up of the image to read the dialogue), Wally West is well-known as Flash, the comic book character, trying to grapple to deal with an ordinary woman whom he loved and wanted to share his world with her. This woman has been trying to understand what it is like to be Flash, she could not. How can Wally make her understand what it is like to be Wally? By including her in his world ... one step at a time.

Of course, I can relate to that. My life is wholly diffrent from many people, but if two feels attracted to each other, give it a shot! You simply cannot say you do not like a person in a matter of minutes or days. The person may drive you nuts at times, but try to understand their backgrounds instead of making damned assumptions of others. The world would be better if people learns to appreciate one's differences ... one step at a time.

To Legends' Gang, thanks for the memories -- let's get together as soon as can be, dahlin'! What about Austin, Texas for New Years Eve 2006 at Roz's place?