Tidbits for Wednesday the 22nd

Xians Lied As Usual: In Colorado Springs, the Air Force Academy has been proselytizing the message of Christianity and professed its hostility towards the students who are not Xians. Even it was said that one officer wrote an email urging the students to convert. Stuff like that has no place in the Air Force Academy. Even several organizations complained about this, the investigation by the school found no "overt religious discrimination" in the Academy just like they did when they said that there are no sexual harassments/rapes in the Academy few years ago.

I'll Burn The Flag: Rep. Randy Cunningham, R-Calif said, "Ask the men and women who stood on top of the (World) Trade Center,Ask them and they will tell you: pass this amendment." when it comes to ban burning the flag.

Cunningham, these people who stood on the top of WTC did not think about passing the amendement, they were thinking that they were going to DIE. They care less if a flag was descerated or not!

I'm not a fan of burning the flag, but it is an expression under the Freedom of Speech. Once again, the wacky Republicans attempt to control what we can do with anything else. They claim to be all for less government, but this is governmental interference. They whined that Muslims went crazy about descerating the Koran, but they are going crazy about burning the flags. Absurdity is the word that I can describe for Republicans.

Car Stolen! Many cars got stolen. And nobody cared. You'd be lucky to find your car in good shape. Sometimes it is all gone -- down to bits. You whined, your friends listened. But in the District, DC Metropolitan Police Department Chief Charles Ramsey's unmarked car was stolen! The District went out on alert to hunt the car down. They actively distributed the flyers out. You'd think they'd do that for anyone who lost the cars? Or even kids? Or even dead cats? Sigh. When will the absurdity end?

Best Quote From ... : This quote was uttered to me from someone on the RAD 2005 Committee who requested not to be identified after we discussed about the RAD & CMRA's lack of efforts to improve its consistency and interests in attracting the folks to attend the conference in July. I told the person that the goal of the expose the RAD Board and the CMRA of its cheap-assed efforts and to make them accountable for what they did to the peers, my friend shot back:

Another Quote: I got this email from a dear friend of mine, she thought I should blog it as well, I agreed:

"Before we work on artifical intelligence, why don't we do something about natural stupidity?" -Steve Polyak 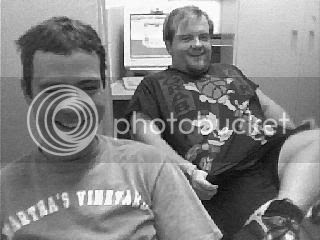 Netrox Is Cute: I chatted with Netrox last night and we were trading pictures, no big deal and he surprised me with something that I did not know existed -- it is a picture of me with Mark when I was working as Computer Lab Assistant in the basement of Benson Hall's Computer Lab -- now closed. The picture is like ... 5 years old! For some reasons, Mark and I laughed at something else in the picture -- he always made me laugh. Mark is one of LW3, don't mess with us. Just kidding. And is it scary that a stranger kept a picture of me for that amount of time ... without my knowledge?

Either way, it is refreshing to find out that there is a person like Netrox out there -- perhaps there is a light at the end of tunnel for me someday. He's smart, charming, funny and yeah, cute. *daydreaming mode on*