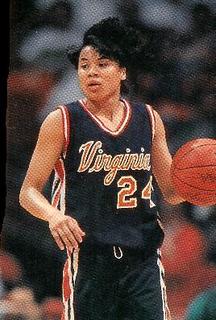 This one on your left is none other than Dawn Staley. I love the posture she brought on the court. Like me, she is only 5'6, but she terrified many players on the court with her court awareness. Like it or not, she can burn you down so fast.

The next picture is none other than Daphne Hawkins and Donna Holt who quickly made me fall in love with Virginia Cavaliers when I first saw them on the court in '86. 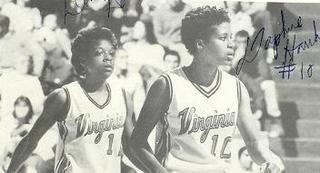 This one on the right is none other than Donna Holt and Daphne Hawkins, they were known as the "Blitz Sisters of Women's Basketball" in mid-80s. Donna and Daphne tends to destroy their opponents in the first 15 minutes of the game in order to coast to a huge margins. They were quick, agile and smooth to a point where I was impressed.

My first game was North Carolina State, Virginia tipped the ball to Kirsten Andersen who gave it to Donna Holt for the length of the court towards the basket but dished it out to Daphne Hawkins who banked in with a layup to start the game. But with 16 minutes left to go in the first half, the socre reads: UVA 27 NCSU 3. That's how blitz it was for Holt & Hawkins. 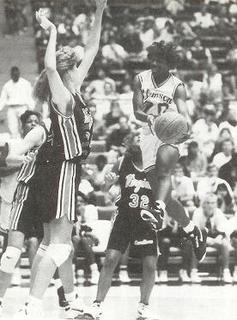 This picture on your left is awesome. Clemson's Cheron Wells attempted to go against the formidable defense of Virginia Cavaliers' Twin Towers, Cheron is 5'4, the Twin Towers is 6'5 with its long arms -- there is no way that Cheron can do something about it.

Actually, Cheron Wells is insane. She seemed not to perform well against different teams but she seemed to excelled against Virginia -- perhaps because of its reputation and name that invigorated her to play well. IN this game, Cheron played so well that they nearly upset Virginia but lost by 4, 85-81. 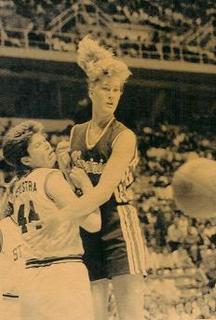 This is the second picture of Heather Burge, a 6'5 post player who went down on Stanford's Julie Zeilstra in an attempt to catch the erratic rebound. I liked this picture because I cannot stand Julie Zeilstra -- it is fun seeing her crashing down on Zeilstra!

Julie Zeilistra was one of starting five for Stanford who propelled Stanford to the national championship in 1990. She was sophomore. Then a year later, she had a ruptured disc in her back. After that, she totally vanished. Never heard of her ... again. 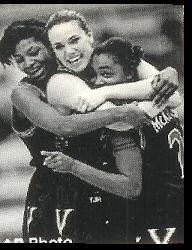 This picture on the left is something I liked -- Mimi McKinney heckled at UNC players after the 105-100 triple overtime win. Virginia's Mimi McKinney had a school-record 48 points.

I sometimes feel like Mimi when it comes to adversity -- and I have friends on my side as well. I'm so Mimi McKinney sometimes. 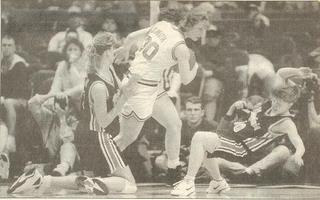 This is the first of two pictures that I have of Ohio State's Katie Smith who cajoled and roughened on players, especially against Virginia, in the NCAA Tournament '93. As of now, you can find Katie Smith playing for Minnesota Lynx.

This bitch knocked down my favorite girl, Dena Evans. Dena is talented Texan guard who also was the Rhodes Scholar at Virginia. Smart one. Gutsy, fast and hard-working point guard for Virginia. At 5'5, it is easy to see Dena getting trashed by 6'0 Katie Smith. 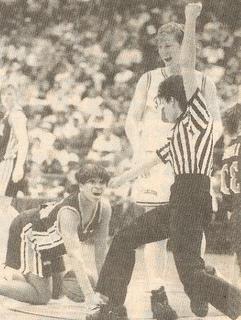 On your left is the second picture of two containing Katie Smith -- she broke out in heavy guffaw when Virginia Cavaliers' Charleata Beale got called for a foul.

Interesting tidbit about Charleata Beale, she is the Head Coach of Women's Basketball and Volleyball at Goucher College, a school that played against Gallaudet in the same conference. 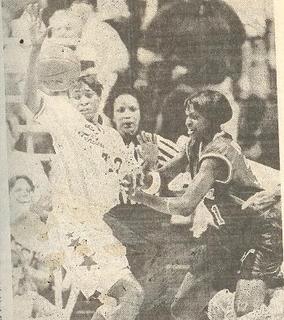 This is the last picture. Whew. This is probably one of fewest pictures that I can relate to. Look at Wendy Palmer on your right as she tried to position herself to set up for a quick basket. Look at her smile, she is up to something. Always up to something else.

In this particular NCAA Tournament game versus Louisiana Tech in Storrs, Connecticut -- Virginia fell behind as many as 12 and was down by 10 at the half. Then in the second half, Palmer dominated the paint as the Cavaliers came back to upset Louisiana Tech by one, 62-61.

Hope you guys enjoyed these assortments of pics. Up next is the narcissitic me in my childhood era.