Formula One at US Grand Prix

I ranted a while ago that I despised the NASCAR events. I clamored that it is not a sport. That it wasted the gas. That we should mind ourselves with the environment and economy. Blah, blah.

NASCAR is very popular in the South where it reigns amongst the white trash circles.

As for Formula One, it is racing sport that is very popular in Western Europe and trying to attract new fans in the United States by taking the competition in US Grand Prix in Indianapolis.

Then something happened. 14 cars pulled out of 20-cars before it started -- due to the safety reasons related to Michelin tires that was too fast and dangerous for the cars to operate on the track in US Grand Prix.

Suddenly, the fans were outraged that they had to pay the tickets only to see 14 cars pulling out of 20 cars line-up, leaving them to watch only six cars racing around the tracks. They jeered, booed and hurled obscenities at the FormulaOne folks, Michelin folks and Indianapolis' US Grand Prix folks. Sounds like the true white trash, eh?

Now this picture is priceless -- why did the Associated Press blur her hand but not the one on the window? 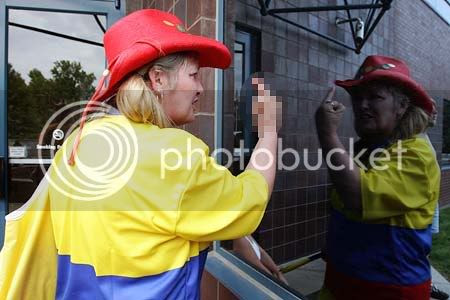