Older Flight Attendants? I flew to Los Angeles, then changed the plane to Las Vegas. Then I flew back to Los Angeles from Las Vegas en route to Nashville before arriving back in New York at LaGuardia International Airport. I observed that the flight attendants are older in their 40s to 50s. I had not seen ONE young person between 20s to 40s working as flight attendant. I thought that the younger flight attendants were largely laid off due to the seniority just right after the 9/11 drama.

Where Are They? In Las Vegas, I noticed something else. I told Chris about it. Chris grinned and said, "You're strange for thinking like that." I told him that during the whole time I stayed in Las Vegas, I hadn't seen a fucking squirrel running amok anywhere else.

Too Many Fatties! AS an experienced person who struggled with his weight for years, I was amused and alarmed with the fact that I saw more fat people in Las Vegas than anywhere else in the world. I even noticed that many persons that used the motor wheelchair are not elders but truly the fattest ones. I VEE-VEEed the couple while I was wearing the sunglasses -- this gave me the opportunity to stare at one couple at the swimming pool. The guy is HOT. Perfect. V-shaped body holding his girlfriend who is ... obese. He was holding her massive hips. When he was bored, he lightly tapped on her hips, it jiggles each time he lightly slapped on it. I was fascinated with their interactions with each other -- it appeared to me that he was enjoying the meaty section of her body. But it is evident that there is obesity epidemic in this country after visiting Las Vegas.

You know when I was a kid, I wished that everyone was fat so that they can learn a lesson or two after treating me shitty. It appears that tha karma is doing its job. Everyone is getting fatter while I'm losing it! Of course, I'm smirking like Hell.

Hot, Hot and Hot! It is no secret that Las Vegas is in the valley of some shitty desert. You expected it to be hot during the day, cool during the night. But it was frankly hot. Even Lucifer Morningstar would run away from Las Vegas under its scorching heat. I noticed that the pigeons sat under the bridges, monorail, cars, parking lots, chairs ... even the pigeons knew not to sit or walk around the ground that is exposed to the sun. Or their talons would stick to the sidewalk! But one postcard was correct, "The weather is HOT but the climate is great in Vegas!" 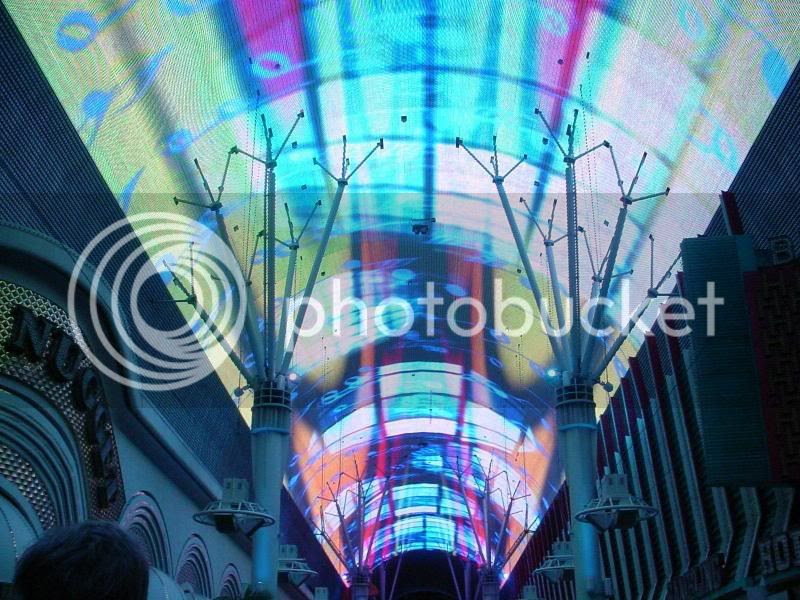 40 oz. of Cape Cod In Downtown Las Vegas, I took Chris to see the Fremont Street Experience -- where they had a great light show on the ceiling. It is great stuff, happens every hour all night long until midnight or so. I noticed that some people were drinking alcoholic drinks on the streets -- especially in these plastic 40 oz. Of course, I raced down to a casino and purchased 40 oz of Cape Cod (cranberry juice with vodka) -- I was bewildered that vodka consisted of 25 oz of the plastic cup for only $13. Chris said it is expensive. I said, "For 40 oz? Please, it is worth the price!"

Sure enough, I was drunk afterwards. Just one drink of 40 oz for $13 to knock me out. Chris made fun of my red face all night long. I even brought the plastic cup in the cab to Gipsy, a gay nightclub before I lost the coolest fatso cup. 40 oz of alcoholic drink for only $13! That was cool!

No Storm Drain? Once in a while, I would hear about the flash floods in Las Vegas during the winter times. I wondered why. Now I know. There is *no* storm drain in Las Vegas. I do not see it at all. The town basically built on the ground above, not below. They lacked the storm sewage to filter the monsoons away out of Las Vegas as needed. I wonder why? Is it because they are tired of dealing with homeless trying to sleep in the tunnels? Inquiring mind(s) would like to know.

White pen does not morph into black pen! The bartender at Gipsy took my white pen -- in midst of my drunken conversation with Chris -- I suddenly noticed the black pen. I insisted that he gives the white pen back, the bartender refused -- I wrote on a note that the black pen is not a fucking caterpillar so give it back! Initially, Chris did not understand me. But I showed the pen! He got the drift and tried to get it back but the bartender insisted that it was his. Fuck him.

Later in the cab, I was fuming at the miscommunication -- which occasionally happened between me and hearing people. It is tiresome and sickening at times. Arguing onver insignificant things. Chris wrote a note and left it on my lap as I stared out of the cab in the darkness. It reads, "Knowing you more in the last few days, you are perhaps the most misunderstood person I ever had met -- people plainly misunderstood you all the time." True words were never spoken, Chris.