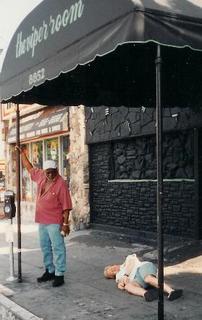 He died of a drug overdose after partying hard at The Viper Room on Sunset Boulevard. When I heard of this, I'm like, "What a loss. I guess I'll never fuck River."

But that is not important nor the subject of my insatiable lust for men like River, right? Right now, he's dead for years.

I was digging up the pictures and found this. I knew you guys will say, "That is so RT!"

What happened is that I ordered my friend to imitate River's last breath in Los Angeles in the summer of 1994 and he did. It was hilarious and bit awkward because people were staring at us with contempt. But we care less. At least, we make our own memories.