Thanks to Chris Rix: The so-called Quarterback of Florida State Seminoles, Chris Rix proclaimed to be the faithful Xian but he neglected to admit that he has the handicapped parking tag which he used for his car to park anywhere else on the campus. Some students were annoyed with hypocritical message about himself, his beliefs and his attitude towards the general students at Florida State. He was busted.

However, it was reported that last week, Chris Sexton was "detained" by the police officers and brought to the general hospital in Tallahassee, Florida. Why? Because the police officers got the calls that there was a person lying in the middle of the road, proclaimed himself to be the God. (Didn't he know that I am the God?!) It was evident that he went nuts, plain as simple.

Chris Sexton is the next Quarterback to replace Chris Rix's abysmal failures at Florida State. I wonder if Chris Rix influenced Sexton of his hocus pocus beliefs? Only time will tell. Maybe he was under influence of drugs -- Florida is infamous for 'Shrooms. Who knows? Or is he gay, feeling the undue pressures of everything caving on him with their expectations for Sexton? Of course, the name is so ... gay and hot.

But it does not stop me from staring at Chris Sexton's picture -- especially with his partial visible bellybutton. 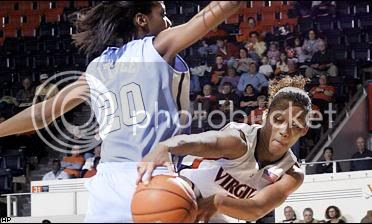 Sharnee Zoll Is The Next ... ? As a die-hard fan of Virginia Cavaliers Women's Basketball team for the last 19 years including the Golden Era (1990 - 1995), I had been somewhat frustrated and disappointed with Coach Ryan's teams in the last 8 years. Coach Ryan received some of my blistering comments which she told the local papers that it "hurts" her. Well, she earned more than $100,000 a year -- which means, she has to win games and championships.

When Sharnee Zoll signed with Virginia Cavaliers two years ago, Coach Ryan bluntly told me that Sharnee will bring the team back to the national prominence the way Dawn Staley did for the Cavaliers in '89 through '92. I rolled my eyes.

Sharnee Zoll's first year already broke the freshman record of assists with 159, trampled the old record of 144 held by whom? Dawn Staley

And Sharnee Zoll was the first Cavalier to make it on the USA U19 World Championships Qualifying Team since whom? Dawn Staley

Perhaps there is a light at the end of the tunnel with sophomore Sharnee Zoll leading the way for the Cavaliers.

Jamika Made Its First Run: Remember Merritt's little teacup chihuahua that everyone thought is very adorable rat? No, I'm just kidding. It is not a rat. It is adorable dog. But by the Warlords of Oka'ara, Merritt lavished Jamika with everything. From there, Jamika decided that she is the Queen, like it or not.

Anyway, Merritt took Jamika everywhere except for the United Kingdom -- they do not permit Elizabeth Taylor to bring her dogs, so I expect the same for Merritt, though. Sometimes I rolled my eyes because when Merritt and I hung out, people would stop us in our tracks and go "Awww!" on Jamika. I'm like, "So fucking what? It is just a dog that the Bald Eagle will pick it up in Alaska!"

But I lived with Jamika for a while. I like Jamika. She is classy and easy to take care of.

So it was not surprising to find out that she won the two First Places in Best Mirror Image (Merritt and Jamika dressed the same stuff) and Terrific Pet Tricks Performance categories and finished Third in Grand Finalist during the Pride of Pets in DC's DuPont Circle last weekend. The close-up snapshot of Merritt with Jamika is soon to be released.