St. Augustine: In St. Augustine, Florida -- the oldest city in North America and the home of Florida School for the Deaf and Blind, the city has decided to reserve the right to discriminate the gay group who wanted to fly the Rainbow flag on the famous Bridge of Lions. In turn, the gay pride committee and the state GLBT group sued the city for discrimination since they permitted the others like Flagler College, St. Photios Greek Orthodox National Shrine, The Civil Rights Committee of St. Augustine, the St. Augustine Lighthouse & Museum and the Broward Yacht Company to fly their flags on the Bridge of Lions. Shame on the city for wantonly discriminating on the minority group.

William Pryor: This is not good news for gays, this is not good news for Deaf people as well! This Republican Conservative William Pryor is expected to be confirmed for the lifetime position with the federal court of Appeals in Atlanta. This will enable Pryor the chances to water down the laws designed to protect, empower and serve the minority groups. How can the Conservatives do this to disabled communities and ethnic groups? Of course, they can. They do not care except for themselves. They will tell you that they care in your face but when it comes to private conversations, they laugh at our expenses. Fuck them.

Amethyst: AS many of you knew that I'm diehard fan of Amethyst who was largely abandoned by DC Comics for many years -- since 1988. She was abandoned because she turned out to be the most powerful figure, even beyond Superman, Wonder Woman, Green Lantern and Flash combined, something that the DC Comics was afraid of alienating the majority of readers who are ... males. So better to force her to die and surrender her "human corporeal body" to merge her soul with ... Gemworld than to alienate the male readers. That was years ago. But years of persistence by loyal fans of Amethyst, the DC Comics is not revealing anything about the return of Amethyst but indicated that she is tied into the major storyline that will affect several books during the summertime. 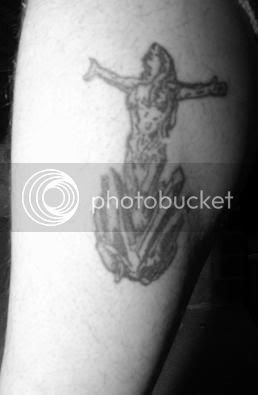 Since I stopped buying comic books, I had been relying on the rumors -- and some of them are mind-blowing for me to accept. It was said that the particular character will discover that her mother is none other than Amethyst whom Arion was trying to protect the secret for years from ... Mordru. But why keep the secret from Mordru? Because Mordru is the father of this woman as well! Wait a minute -- are you telling me that the same characters which battled each other and Amethyst burying Mordru alive for eons ... actually fucked each other? No, that can't be.

Either way, it'll be interesting to see how DC Comics will plot to bring my fabled character back into the spotlight as she deserved! Hope they will not trash Amethyst. Yeah, you are seeing the tattoo of Amethyst on my left calf which she was casted into the statue after she surrendered her corporeal body to merge with Gemworld to prevent Mordru and his minions from taking over the planet. Which is the probable reason why Mordru left Gemworld for Earth in his valiant efforts to conquer the universe.

The last time I knew of Mordru's whereabouts was that he got himself nailed into the "Rock of Eternity" which fed Shazam's powers. I expected Mordru to free himself to wreck everyone's peace and tranquility. This is the reason I loved Mordru -- he gave everyone few rounds of mindfucks to everyone else who tried to stop him from reaching his goals -- that is to be the God.

G-8 Summitt in Edinburgh: One well-known figure Bob Gedolf who were offended by the fact that the series of concerts to benefit the needs of Africa lacked the black musicians called for one million protesters to derail the concerts. Edinburgh is shivering because it will expect the Anarchists *and* protesters to wreck the town when G8 Summitt hits the town next month. My question -- there are MANY, MANY black artists and they could not find ONE for the benefit concerts? They are definitely lying through their yellow teeth.