Did I get your attention? I hope so.

Urination:It is silly that the Bush Administration accused Newsweek of harming the image of Americans across the Muslim world when it revealed that the soldiers, contractors and others defiled the Koran. Newsweek retracted. Now the reports from the United States Military indicated that the stuff did happen.

And they said it was an accident that the urine flew over. Ok-ay.

Carl: This afternoon, I got to talk with Carl Denney for the first time in years via the videophone. He looked good as ever. I finally got to meet Tuesday. I still think it is gonna be funny to say, "I'll marry Tuesday on Saturday." I got to meet Denney's boy. It was good to see him and his boy(s) running around the house. Thank God I ain't the father. I'd go insane with 3 kids running around and 1 on the way.

Chris: This comment has nothing to do with Carl Denney at all. In fact, I had an interesting encounter with the video relay interpreter today. At first, I met a guy in the chat room. Talked for a while, this guy impressed me enough -- he wanted me to play with him and his boyfriend sometimes this week. Name is Chris. He wanted me to come over for a dinner ... and if things go well, we engage in menage a trois. Told me to call him to arrange the date and all that. I agreed. Chris mentioned that his partner is Steve. I thought it was all right. Called the video relay service, they asked me who and what number do I need to reach. I said, "Chris and Steve and XXX-XXX-XXXX".

The relay interpreter smiled and said, "Calling Christine and Stanley". I interrupted, "No, they are Chris and Steve." The female interpreter said, "Wait, they are a couple, right? They have to be Christine and Steve." I said, "Excuse me, I said they are CHRIS and STANLEY. They are gay! So am I! Just shut up and listen to me. Their names are CHRIS and STEVE!" I gave her the infamous look that made her cower before me.

The female relay interpreter profusely apologized and got in touch with the couple. I could not believe that this woman was trying to correct me. It was nice to chat with Chris and Steve -- we made the plans. Blah, blah and blah. Then we talked a little about sex itself, what limitations and all necessary stuff. It was absolutely weird watching the female interpreter to sign the sexual words to me but that was part of her job. I felt grossed out. I quickly IMmed Beth that I can't believe I'm having the dialogue with this interpreter about the menage a trois to the couple. She went ROTFLMAO on me.

Usually, I can do this via the TDD where I do not have to see the relay operator's facial expressions and they never knew who I am. But I can see the interpreter's face, and her seeing me! That was too ... personal. Oh, yeah, the appointment is for Wednesday.

Note: The comments above has been corrected to protect the names at my wish.

Watergate Scandal: I'm sure you heard all about the Watergate Scandal, the Deep Throat identity and GW Bush's idiotic comments that he is curious to look in this subject -- I'm like, "Whoa, I learned about it in high school and you did not?"

Some lambasted W. Mark Felt for not following the procedures. Well, Nixon was corruptive. He will go as far as to bury the secrets in order to get what he wanted. Even go as far as to convince the FBI to keep it quiet. W. Mark Felt made sure that it won't be silenced. For that, he is the true American hero. GW Bush can kiss my fag ass. So does the idiotic Patrick Buchanan!

On the same subject, many news outlets kept on showing the face of W. Mark Felt on television, papers, internet and magazines. Like many gay men across the nation, my eyes kept on darting towards the guy on the right side behind the old geezer. W. Mark Felt's grandson. Is he HOT?! 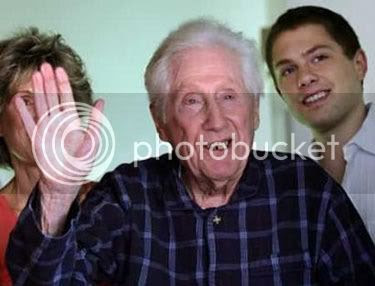 Name is Nick Jones. I think he's going to be famous in the long run. Stay tuned.