Let it be known that I deplored the memorial sites.

When someone died at the intersection in an automobile accident, people tried to stick damned wetty, stinky dolls, disgusting rotting flowers and idiotic messages to the dead people (do the dead people read?!) as well as some silly pictures posted on the lampost, electricity pole or whatever that can hold it up.

This created an eyesore for the neighbors who had to put up with these ridiculous sites. I know of a particular street in Washington, DC where it still has the doll maimed to the tree for YEARS -- you probably could count the shades of fucked-up stinky teddy bear doll on the tree.

It is OK to set up the temporary memorial site for few weeks to deal with the grief -- but for months or even, years to a point where the neighbors who had NOTHING to do with this dead person who got killed on this street by random events that did not pander to the neighbors' interests -- do they have to put it up with it?

I knew of a couple in the District who tried to clean it up, the couple was sued by the parents and friends of a kid who died to preserve the memorial site that already disparaged the looks of neighborhood corner for years. But lucky for the couple, the case was dismissed and they took it down. But the family and friends made them feel like they were evil for doing it.

Now, I knew of a good friend whose her parents owned a home in The Poconos in Pennsylvania -- one idiotic teenager got killed using the 4-wheeler ATV, the same type that injured Ozzy Osbourne. This kid got killed on the spot where my friend's parents' entrance to the cabin is. So when they decided to go to the Poconos for a break, they were alarmed to see massive junks on that tree along with pictures, flowers, messages and all that shit.

The parents were not sure what to do with it since it is ON their property. They wonder when will it be the right time to take it off because it is eyesore and hideous thing to remind the owners that there was dead person on their property. Few weeks later, they shaped up and told the folks of dead boy to ... take it off. Since then, I am not sure if they had took it down. 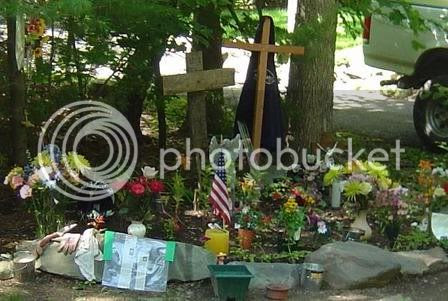 Update: My friend paged me that her parents' still has this memorial site by their entrance ... and this Thursday will be one year anniversary of his life being snuffed out. She enclosed the picture of this absurd memorial site. This is her parents' vacation home away from they urban lifestyle and they had to contend with these stuff on their property each time they ran off to the countryside. Enjoy the latest picture.

But the point is that they are hesistant of hurting others' feelings. But they have their own lives to live. They do not need to adhere to anyone's feelings because the owners are the ones who had to endure this everyday while others just came and go.

Apparently, last week, I went to Las Vegas, there was a motorcycle chase that resulted in fatal accident that snuffed the life out of 24 years old, Justin Wellers right across the street from my place next to the local church. The friends and family relatives just put the memorial site on the property of a pentecostal church. Of course, I'm piqued with curiosity -- how will the Church handle this in the long run?

AS you can see the picture, it appears that the guy who was trying to fix the electricity post seemed to hump it on the photograph. Oh, well. But the memorial site can be seen on the left side next to the guy with black polo shirt and blue jeans.

Only time will tell if it becomes an eyesore.