Do I Have Fever Cavaliers? 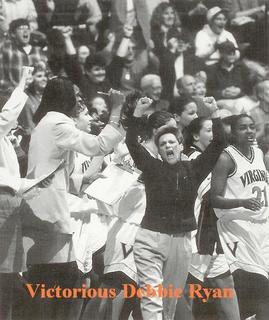 I just finished watching FEVER PITCH, I was pretty much touched by the film. It may not be the best nor worst film I ever had witnessed but it certainly leaped at something that I cannot describe -- the passion that I wield for Debbie Ryan's Virginia Cavaliers.

The film is not about Virginia Cavaliers, it is about a guy in Boston whose his passion is all about Boston Red Sox. He is quite obsessed about Boston Red Sox, can pull the statistics off his mind, try to revolve his life around the games, hang out with friends who loved the Red Sox. Purchased all these kinds of merchandises ... shower curtain, welcome mat, assortments of junks ... all with the Red Sox. It interferred his ability to love a woman and the sport.

Throw that in with John Crotty's letter, too. His handwriting was awful but who am I not to let him write back? He was HOT. What happened is that I was sitting up close in University Hall watching Dawn Staley leading the Cavaliers to a 95-46 blowout of Tar Heels, a friend of mine shoved me on my left arm and said, "Guess what? John Crotty is sitting right behind you!" I thought he was joking. I turned and he was staring at me directly. God, I was only 13. I blushed. He was quite beautiful. We talked a little. Later, he asked for my address because he wanted to send few things over. And he did -- posters, books and a nice letter with scrawny handwriting on it. John was quite hot and sweet. Nice to know that he's doing well in Coral Gables, Florida. He better prepare his two daughters for Virginia Cavaliers someday. But I digress!

Anyway, when I was in high school, the expectations for Virginia to win the national championship was enormous. It was not a "luck", it was a must. When it did not happen, it turned into something that "was supposed to happen" that languished a part of my soul. I guess, from there, I was cynical. I can relate to Jimmy Fallon's character, Ben Wrightman, when he became upset that Boston Red Sox just played its greatest game ever which he missed when he went out with his girlfriend to a birthday party. Ben's obsession with the Boston Red Sox is akin to my passion for Virginia Cavaliers' Women's Basketball.

I can relate to the Red Sox fans who condemned New York Yankees from day one. I condemned Tennessee Lady Volunteers. I say things that God would turn white -- or red, depending on the color, but you get the picture -- I even wrote on the mailing list, shooting a line that I hope the bus flipped and all Tennessee players get injured so that they lose a game! God, you guys should see the uproar on the mailing list for weeks! I even told Chamique Holdsclaw in person that she was retard for going to Tennessee. She laughed.

I absolutely *hated* Tennessee! Virginia lost to Tennessee 11 times in 12 tries. There is nothing in the world that gets my blood boiling more than Coach Pat Summitt's Tennessee Lady Volunteers. I met Pat Summitt during the 1994 NAD Convention in Knoxville. I even joked with her that I am a fan of Virginia Cavaliers and that I was there to demonstrate my displeasure with her for beating Virginia. She grinned. At least, I'm not violent person. I just talked trash, that's it.

On another hand, Yankees routinely beats Red Sox so much that the fans on both sides get ... let's say, personal.

One time, my ex inadvertently said "good game!" after Virginia lost to Penn State on a buzzer-beating shot. For a week, I punished Todd by denying him the right to fuck and kiss me. That's what I did.

One time, it was in the Elite Eight where Virginia's Dena Evans pulled a three-point shot at the buzzer to beat Ohio State but the three-point shot was disallowed because Coach Ryan asked for a timeout right before the shot -- thus, Ohio State won the game in order to reach the Final Four. I was devastated -- a fucking Ohio State fan was next to us, gloated as fans began to leave the game in Richmond Coliseum. We were in the upper section -- she was that close to make me shove her off the upper section to be splat on the lower section!

One time, I drove through a snowstorm to watch the Cavaliers play its worst game of the season and lost to Clemson. I was furious. Then to make things worse, my car stalled and would stop running if I go more than 55 MPH on Route 29 North to DC -- I ended up driving more than 5 hours just to get back to DC instead of normal 2 1/2 hours. When I got home, I quickly got on a computer and fire a blistering email to Coach Ryan. Few days later, Virginia routed Duke and Coach Ryan mentioned about the "particular email she got from a fan" hurts her and she shared it with the team -- who went on to destroy Duke. I was certain that the particular email was none other than me. 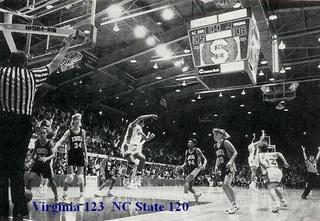 I even witnessed many great games and worst games. I had the opportunity to witness one of Virginia's greatest game versus No. 4 North Carolina State in Raleigh, NC. IN that game, NC State led 49-40 at the half, then built a 20-point lead, 64-44 in the second half before Virginia regrouped to tie the game at the end of regulation. Drama ensued. 1st overtime! 2nd overtime! 3rd overtime! Then Virginia's Tonya Cardoza travelled -- but she stole the ball and coasted for a layup to win 123-120 in 3 overtimes! It was such a wild game that I think even if I'm afflicted with Alzheimers Disease, I'll never forget that game. When NC State hits a three-pointer to send the game into third overtime, I swear the Reynolds Coliseum was going to flip its cover off the building. It was intense.

I was at Cole Field House when Virginia was ranked No. 2 and they faced No. 1 Maryland Terrapins. Coach Ryan joked, "Dawn has to score or she'll walk home tonight!" Dawn got the message as she scored 24 points for the 75-74 win at Cole Field House in front of more than 14,500 fans. I pulled Maisha Franklin to watch the game with me. She had the glimpse of my passion -- the love for this sport.

But time has passed, Virginia's chances of winning the national championship has diminished because of many reasons. I also grew up. I began to step back and tell myself that it is only a game after Virginia lost a big game. I do not need to go nuts and emotional about it. But I do want Coach Debbie Ryan to win the National Championship. I'm sick of Geno Auriemma and Pat Summitt winning too many times. I'd love to see Virginia beating Stanford, Connecticut and Tennessee in one tournament en route to the national championship. One day, it shall happen. Because I have this particular faith in this woman to do the deed. 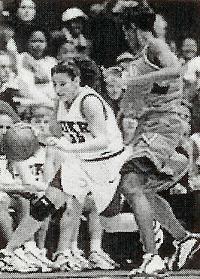 One little kid asked Ben Wrightman, "I know you love the Sox, but does it loves you in return?" Ben was stumped. I agreed with the kid. I recognized it in '95 or '96 that I gotta tone it down. I did. I still have these stuff in some drawers. I look at them once in a while. Debbie Ryan needs to send me the last 3 years of media guides in order for me to keep up with the "collection". Ha.

But I also wonder if I could find a boyfriend who could understand, handle and accept my passion for Virginia Cavaliers? AS the film depicted, it is not easy to find a girlfriend for Ben Wrightman, imagine this for a boyfriend to tolerate my emotional outbursts when Virginia lost or won the games? I'm truly fucked, am I? Ha. I'm not worried about it but the film certainly touched a nerve of mine.