In Midst Of Everything, New York Is Still There! 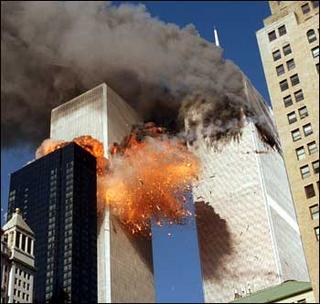 4 years ago on a Tuesday morning, we got the jolt of our lifetime with this bang. Actually four times.

I still remembered where I was at that time. I was next to Larry Gray in HMB Atrium at Gallaudet when I first saw the North Tower burning. No need to repeat the whole scene. But the point is that everyone remembered where they were. I do remember the moment when I was notified that Gallaudet student was murdered. Same thing with Princess Di's death.

I remembered GW Bush sitting leisurely and waiting at some elementary school during the nation's darkest moment.

Then I remembered GW Bush saying that we'll go after Osama Bin Laden. So far, still nothing. In fact, he's still chasing the phantoms -- he even joked at some fundraising dinner that he's looking under some table few years ago -- utterly tasteless. Osama Bin Laden is 6'5, for god's sake! That is pretty rare for Arab to be that tall. And yet, we cannot find him in Tora Bora. Today, we are simply playing tic-tac toes with Al-Qaeda, simply put. We may have clipped some tentacles of Al-Qaeda, but they are improvising.

To top it all, he and Dick Cheney claimed that there is a connection between 9/11 attacks and Iraq! Even with Colin Powell's interview with Barbara Walters (?), he considered his report to the United Nations to be a blot of his career. With the daily suicidal bombings in Iraq that seemed to desensitize everyone else, especially with the Xians, in the process -- their attitude was: "Better over there than here!" It is as if their lives are insignificant than ours.

As for New York whose had to dealt with less than 3,000 perished victims -- not only the victims, the city also had to deal with countless of families that lost their loved ones. It was quite a period of self-examination for New York which, I can frankly say, they passed it with flying colors. Instead of waiting for the federal government to pour money in, they licked their wounds, comforted each other, cleaned up the mess, took care of the dead, calmed the jitteries of Wall Street, stabilize the economy -- all with a heavy price on many New Yorkers' souls, while the nation talked the talk for months.

But guess what? New York still rises without anyone's help. It has been doing just fine for years. I think the picture below is a testament of what New York is all about -- even with the smoke billowing from the Ground Zero, you can see the beauty of New York still standing proud. 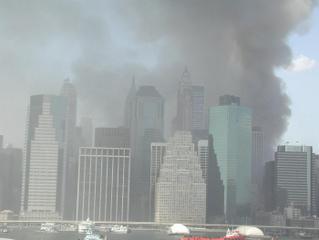 New York, New York!
This is New York. Sophisticated. The Best. The Greatest city in the world. This is the city I adopted when I first moved to New York. Even with the fact that I'm in Philadelphia, I still heart New York.