HEY! YOU FREEZE! GET DOWN ON THE FLOOR!

Thanks to the tip of a certain friend in Philadelphia who alerted me of this picture. 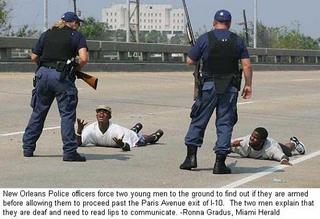 It is absurd to think that if they are Deaf, it means they all can lipread. I highly doubt they can lipread. They probably improvise the best way they can. Knowing cops, I do not trust their antics.

If I was the guy on the floor, I'd say in ASL so fast that they cannot decipher -- I'd say, "Get that fucking gun out of my face or else, you pig!!" -- at the same time, putting a smile on my face.

But this is very common amongst Deaf people when a crisis appeared, we have to deal with this crap.

Dale Fatterson Is An Idiot: Dale Fatterson (Update:I removed the link because Dale Fatterson removed his picture, how pitiful is that? Let me describe what he looked like -- he is enormously obese who forced his pregnant wife to work while he stays home, surfing the 'net to attack people as he wished!) mentioned that on his dying forum that "ASL nearly killed this guy," when a Deaf person could not understand the written direction. This fat boy thought ASL was solely responsible for his inability to read very well. Actually, Dale Fatterson, you got it all wrong. His lack of educational background may be the reason why he was not able to understand BOTH languages. He is likely to attend schools where his teachers are HEARING ONES who do not care nor take the time to educate him properly. ASL has nothing to do with it, you dumbfuck!

UPDATE! I received an email from a volunteer at the Astrodome in Houston, she is able to confirm that the email that was circulated to Deaf people across the country back and forth of 17 Deaf people dead or missing is, indeed, a hoax. But is it cruel or heartless? No, not really. In fact, if I found out that I was presumed dead, I'd be amused by that. Don't cry a river about it, please.