Gil Lentz Victim Of Sleep Apnea: I learned that Gil Lentz died last Monday morning at the age of 48 in Fremont, California. It was said that he died of Sleep Apnea. He was quite popular figure at California School for the Deaf at Fremont. He coached football at CSD-F for 13 years, captured the respect from many hearing and deaf opponents by winning many games despite the limited resources and/or numbers of players. It was said that he also refereed for public high school basketball games in Bay Area as well! Gil enjoyed basketball, football and golf.

Why did I mention him on my blogsite? Well, he once coached at VSDB in late 1970s - early 1980s, he was the assistant coach under the legendary animated Head Coach Rocoo DeVito. Gil once emailed me about 5 years ago that he considered Rocco DeVito to be the one that influenced him to coach very well at Louisiana School for the Deaf and at California School for the Deaf at Fremont after he departed from VSDB.

Rima Cornish, herself an alumni of CSD-F, mentioned, "I love him becuz he loves children and people. He always love being there for us... We have our own moment of him letting me joke with his football players. I always choose to visit him over my damn boyfriend. I have wonderful memories with him when it comes to weightroom with his football boys, he usually not let any girls get in but me [so] we always get chance to pick on the players with variety requests. [We ended up] Enjoy our laughs together."

Way To Go, Christian! A friend of mine, Christian Burke, played on a flag football team consisted of Deaf players called "Aerial Attack". In its national tournament for deaf teams, Aerial Attack has dominated the 8x8 and 4x4 fields in the last two years -- they are heavily favored to win their third consecutive championship. But they did something remarkable recently -- the team, Aerial Attack, just became the first Deaf team to win a game in the United States Flag And Touch Football League National Tournament. Pop quiz -- which one is Christian Burke?

Hurricane Rita Marches On! In the open sea, Rita is building its power before it reached the Gulf Coastal -- let's hope that the residents of Galveston has common sense to leave the city. The last time, the hurricane plowed through Galveston -- it left 8,000 people dead. Including the scores of people who wanted to see the hurricane up front. It happened in 1900. However, I just learned that with 2 1/2 months left to go, the hurricane season is far from done. And it only has 4 names left! They are Stan, Tammy, Vince and Wilma! I'm not sure how it works when they ran out of names, though.

For your own amusement -- some of my friends' names will be featured as Hurricanes or Tropical Storm. 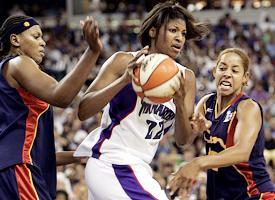 DeMya Walker is the first Virginia alumni under Coach Debbie Ryan to win any championship. DeMya Walker's chances to win the national championship at Virginia was ruined by Tennessee Lady Volunteers when she was a freshman. Long story. But anyway, DeMya is 6'3 post player who can do everything else and more. She is agile, finesse and fast player who led Virginia in blocked shots. This year, she averaged 14 points and 5 rebounds per game in 27 minutes at Sacramento Monarchs.