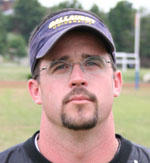 Maybe Ed Hottle Is The Real Deal: For the first time in a long time, Gallaudet football, under the direction of Head Coach Ed Hottle whom I thought is very HOT, is now 2-0 after posting hard-fought wins versus Shenandoah University 21-13 and Apprentice 13-12. I should mention that both games took place on the road. Even with two wins, this is great progress for the team and Coach Ed Hottle. But let's wait for the next three games at home -- if the team is 5-0, then Ed Hottle means well. If the team wins more than 5 games, I'll be impressed.

Katrina's Heroes? After Katrina whipped New Orleans, people ptiched in to help out with the relief efforts. People also claimed that the cops, National Guards and many others are doing something to help them out. They even told the media that they are going to take "care of people" that sits on the highway. What did they mean by taking care of them? The truth hurts. People out there thinks it did not happen but yes, it did! Check the link for the shocking revelations about the victims of Katrina.

And to think this happened in our country -- we are good people, I guess. Good enough to let things like this slide by and act like we are noble. Except that we are not.

The Hanging Garden: I got to watch a film today called "The Hanging Garden". I enjoyed it very much. It focuses on a dysfunctional family with some dysfunctional neighbors as well. There is this big boy who happens to be gay, he liked to fuck Fletcher, his sister's boyfriend. Later, you get to meet a young girl who loves to cuss "Fuck you!" to any adult -- it turns out that this particular fat boy who is gay is the father of this illegitimate daughter -- which his mother paid someone trying to turn her son straight -- the fat gay boy at 16, impregnated this woman. You get the picture. Later, I get to see this former fat boy turning into a hot, thin gay man. Even with his sister's "I don't care" attitude, her husband still wanted him. It was weird fucked-up film but I enjoyed it. The ending was not so All-American type which is nice to start with.

Did You Wonder ...: Whether if the ABC's Home Extreme Makeover will do few houses in New Orleans? I just read an article where a poor couple refused to leave their property because they just planted the crops in their backyard -- even right after the floods which swamped the area. One reporter asked the family if they are worried about their food crops being contaminated. One woman laughed, "Guatemala is worse than this, it is OK with me." Fine with me, darling.

Religious Extremists Are Dangerous: When a disaster struck any place, people always turned to God for answers. Islamic Extremists said that Hurricane Katrina was the answer on their call to destroy the United States. Xian Extremists said that it was the answer to cleanse gays, pro-choice and shit. GW Bush mentioned about the National Day of Prayer. Bleargh. Like it would help us at all. I personally think it is their right to believe in God and have a relationswhip with a hocus pocus, but trying to conjure ideas to say that God did this, that and there in the name of "justice" is full of shit. Get a life, really!

This Is Lower Manhattan! HELLO! I stumbled upon one comment by somoene who thought that the site of World Trade Center should be memorialized. I disagreed. Lower Manhattan is the Financial District, the best in the world. Business talks. People come and go. Businesses are here to stay. I'm sick of people who attempted to capitalize the victims to turn the place into hallowed ground! The dialogue is over, build the corporations, leave the memorial in some corner for all I care. In 200 years, nobody gives a shit about who's who jumped off the building and splat. If you expect us to memorialize this, then memorialize every victims that were blown apart in Israel, Egypt, Kenya, Tanzania, Bali, Indonesia, Iraq, Turkey, Great Britain and Spain! The Financial District is not fit for any cemetary and/or memorial services. You can have a museum or the memorial site but do not turn the whole area into the hallowed ground -- no sane New Yorker wanted that!

Guess Who Won Venice's Golden Lion? In Venice, Italy -- Brokeback Mountain won the top prize at Venice's Film Festival. It was reported that many viewers emerged from the film theaters in awe of love story between two gay men. Heath Ledger and Jake Gyllenhaal, both are straight, seemed to hit a chord with the audience. Can't wait for this!

Henh Henh Henh: Last night, someone told me that I got a "cute" sound of laughter. I was perplexed. He nodded, I tried to tell him to stop it as I could not stop laugh. He then wrote, "HENH HENH HENH HA HA HA HA!" as in trying to write down what I just said. Well, my friend is cute and sweet. What can I say about him? It was fun spending a night with him. Ahh!

Anyway, when he talked about my laughter, he was not the first time who said it -- apparently, hearing people do love to hear Deaf people laugh, of course, not in a loud, raucous guffaws. But a simple laugh, really. I'm sure, many of you Deaf readers got comments from hearing people who told you that they liked your laughter and asked you to do it one more time. Icky but very amusing, I guess. 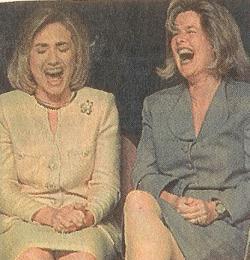 This afternoon, I was cleaning up the scrapbook and I came across this great picture of Hillary Clinton who laughed so hard with Tipper Gore in 1996 Democratic National Convention, I believe. This is one of many reasons why I liked Hillary. First of all, she is not afraid to laugh hard, actually to open her mouth to bellow loudly. It reflects her human side. The real side of humanity. I feel that the persons who runs the governments tend to be pretentious with their fake laughters and fake smiles -- these has to go. A simple, honest laughter is the best.