His Announcement Is Insensitive! When Hurricane Katrina steamrolled the Gulf Coast communities, Dr. Irving King Jordan announced the retirement. Is it only me that I thought it was insensitive of him to do that? He could have waited until Friday or a week after that. When I heard about it, I thought someone was joking. But no, no one was joking.

After talking with 4 persons online, each thought it was insensitive -- one said that there are about 20 students that hailed from Gulf Coast communities -- how can he do that in front of them? 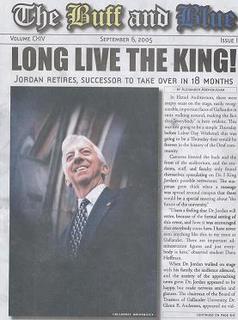 Silly Thing To Say?: Dr. Irving King Jordan did a lot of things for the University. And he did a lot of things that did not pan out the right way that many people wanted it to be. The truth is that he was a decent President but he was never a popular figure -- not after he forced Dr. Roslyn "Roz" Rosen to resign from her position. You see, Dr. Rosen is considered to be popular figure among faculty and students. Dr. Jordan chose the hapless puppet, Dr. Fernandes to replace Dr. Rosen.

I do recall remembering the fiasco with the Communication Statement which pissed many people from the alumni to the student body. Yes, Dr. Jordan managed to get money from Congress and donors over the years, that is good. But it is no secret that he alienated many people when he took Dr. Rosen out.

I do not think Dr. Irving King Jordan deserved the headline that Donald Tropp and his team at the Buff and Blue gave to Dr. I. King Jordan! Of course, I gotta give two jeers to Donald Tropp for having this ridiculous headline. That was tasteless and barf thing to do.

In fact, my friend from DC alerted me when she saw the headline -- she was appalled with the headline. How can anyone do that to brownnose this person who turned his back on Dr. Rosen?

I'm Sorry But I Had To Snicker: I know the tragedy in Gulf Coast communities are difficult and crazy but Deaf people sometimes are so melodramatic. I'll leave you to your own imagination. Hat tip to Michelley for the link.

For Hearing People's Curiosity: Want to understand what it is like to use the videophone? Or even the video relay service? Check this link.