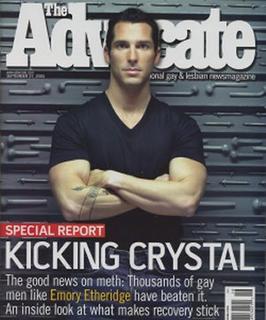 Shame On Advocate! What's wrong with this picture? Crystal does not make you look sexy or cute. In fact, I already saw few addicts -- their teeth are fucked up. Their skins are full of sores. And all that shit. And Judging the picture, it is as if The Advocate is glorifying Crystal Meth. It is like "See this guy? You can try Meth and kick the habit? You won't lose a look!"

Just like HIV meds' advertisements -- you always see very good looking guys saying, "You Can Be Positive and Look Good!"

But on the bottom of the poster lies a warning that says you'll have side effects of diarrhea, vomit et cetera.

Advocate should have a line somewhere else that. I mean, it is travesty that The Advocate is doing a disservice to the readers. It is true that they think they're above the rest.

Bubonic Plague-infected Mice Missing: IN Newark, New Jersey -- a laboratory reported that three mice carrying the strain of Bubonic plagues has disappeared from its laboratory and the FBI agents said that the chances of mice passing it to others are nil. Remember, the Bubonic Plague killed 25 million Europeans, consisted of 1/3 population in Europe!

Shame On Dr. Jordan: Dr. Irving King Jordan, the President of Gallaudet University to be retired in December, 2006 has spent funds to wage the glossy letter all over the campus and throughout the country to announce and emphasize his retirement in people's faces. 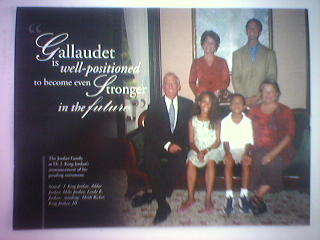 Dr. I. King Jordan made history in 1988 when he became the first deaf president of Gallaudet University. The week-long student-led protest, called DPN for “Deaf President Now,” which led to his appointment remains a watershed event in the lives of deaf and hard of hearing people all over the world.

On September 1, Dr. Jordan announced that he would retire as President of Gallaudet on December 31, 2006. Through his leadership, the university’s endowment has increased from $5 million to $150 million; new facilities have has been added and academic programs strengthened; the operating budget and university offerings have grown without incurring debt; outstanding administrators and faculty members have been hired; the size and quality of the student body has increased; and a long-term strategic vision for the university has been developed.

Dr. Glenn B. Anderson, chairman of the university’s Board of Trustees, said that “King Jordan is an extraordinary man whose tenure will be remembered for his outstanding accomplishments as a Chief Executive and as a role model and spokesperson for the deaf community and the disability community. In this role, Dr. Jordan has helped change for the better the lives of millions of Americans and kept an international spotlight on Gallaudet University.” Dr. Anderson announced that a national search will soon be underway to select Dr. Jordan’s successor.

Dr. Jordan said that he has had “the good fortune to be president during a period of growth and prosperity at Gallaudet and during a new era of recognition for the rights and abilities of people who are deaf or hard of hearing.” He also thanked his wife of 36 years, Linda Kephart Jordan, for her tireless work as Gallaudet’s First Lady.

Both Dr. and Mrs. Jordan expressed their deep gratitude to the Gallaudet community for providing them the opportunity to serve the institution and shared their belief that “Gallaudet is well-positioned to become even stronger in the future.”