A friend of mine in Los Angeles immediately alerted me of two pictures which were broadcasted on Yahoo.com's News Photos. At first, there was this picture of black teenager but the other one was taken offline, along with the Yahoo! making a statement -- I was confused. Shortly, after looking around, I realized that something has happened.

Here is what exactly happened:

In another picture which depicted a black teenager who waded through the flood with soda and stuff, the captions read: "A young man walks through chest deep flood water after looting a grocery store in New Orleans on Tuesday, August 30, 2005. Flood waters continue to rise in New Orleans after Hurricane Katrina did extreme damage when ..." 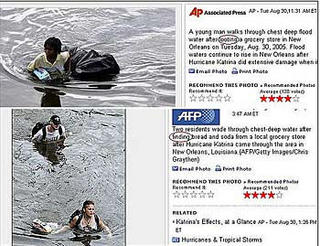 As you can see, if you are white, you did not loot -- you just find it. If you're black, you're looting! This created a huge uproar amongst the bloggers recently via Wonkette and Gothamist which prompted Yahoo! News to vacate the picture make a statement.

To whoever produced the captions, shame on you for attempting to make a racial bias like many people did in 1950s.

Related to New Orleans's Plight: I was told by a friend of mine that Shelley Koczoi is missing in New Orleans, Louisiana. Anyone care to confirm this rumor? Since the plight of New Orleans is on a large scale, it is obvious that many Deaf persons are in -- anyone willing to supply me the names and information -- I could post it for y'all. Just let me know.

Related to Katrina's Path: My brother, Gary, has been somewhat absent since Hurricane Katrina (category 1) skirmished Florida -- my brother lived in the southwestern part of Miami -- he said that the electricity were out for 2 days, and his cable connection were out for 5 days. He was not able to do much in the last 7 days. But he said riding out the storm was fun, of course, it was category 1. He said that his best memory with any hurricane is Gloria which we rode it out in mid-80s. I agreed.