Next month is October. That means what? The autumn is coming slowly. Halloween is going to sprout up in places like RiteAid, CVS and Duane Reade across the nation, trying to sell these damned candies. It also meant what?

It is time to go back to the movie theater and participate in The Rocky Horror Picture Show. 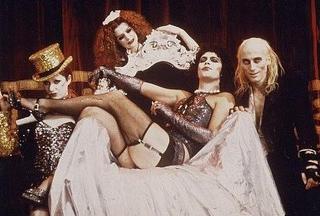 I'm Just A Sweet Transvestite from Transexual, Transylvania!
Flashback to the Fall of 1994 at Ely Auditorium, now known as Andrew Foster Auditorium, on Gallaudet campus where Carl Denney first set up the movie theater where everyone pays $1 or so to watch the movies. Remember the film where "SPEED" made its first appearance on the tape, the audience was so full that some people had to be turned away. Someone was so pissed off that they triggered the fire alarm (some said They Abbey burnt the food which sets the fire alarm but I never knew the truth!), everyone refused to leave the auditorium? Priceless. Carl and his cronies had to mark numbers on everyone before they leave their seats to prevent them from stealing the spots.

One day, Carl announced that there would be a feature film on Rocky Horror Picture Show at midnight in Ely Auditorium. I heard so much about it but never get to see it. So I went. Only 10 people showed up, including the late Rebecca Luftig's father who stood in the back of the audience. I kept on watching him doing the imitations and doing the dances when Dr. Frank-n-Furter made its first appearance. It was an eye-opening performance to see a man in his fifties to shout and dance. Then he later ran to the stage and take over ... in front of less than 10 people who hollered him to go on.

Later, I learned that it is typical part of Rocky Horror Picture Show. In Los Angeles -- I went to the midnight feature on a Friday night on Santa Monica Boulevard just off the 405 freeway where people converged to the theater, all dressed up as someone else in that film. Sure enough, I had a blast time. People were throwing things in the movie theater. People were dancing, people were shrieking, people were spraying water guns on each other, people threw the toilet papers at each other. It was such an amazing experience.

If you watch the film on VCR, the chances is that you will never understand why it is very popular. It does not work in a home where you can just sit alone. It works fabulous when you're in a big group, especially in an auditorium.

Many actors cherished their roles on this film -- except for one, Rocky, of course! That guy who now lives in Phoenix claimed that he was duped into believing that he was not featured to be a "hot guy", that he would act more than just a male model for the world to drool at.

The scene where Dr. Frank-N-Furter said this line, "It's a rather tender subject ... another slice, anyone?" Everyone else looked at their meats on their plates. Priceless. Or a line where everyone said:

DR SCOTT: Janet!
JANET: Dr Scott!
BRAD: Janet!
FRANK: Rocky!
ROCKY grunted and grabbed Janet's arm.
FRANK: Listen! I made you, and I can break you just as easily!

I intend to show up with Liz and friends in October here in Philadelphia if there is one. I shall find out. 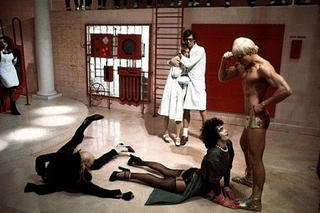 Dr. Frank-N-Furter: But a deltoid and a bicep
A hot groin and a tricep
Makes me - Ooh! - shake
Makes me wanna take Charles Atlas by the hand

Chorus: I can make you a man

Then Dr. Frank-N-Furter turned to give Janet a hard stare which subdued Janet into silence

Chorus: In just seven days
I can make you a man

Dr. Frank-N-Furter: Dig it if you can

Chorus: In just seven days
I can make you a man