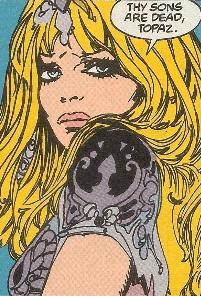 One of my favorite comic books was Amethyst. In Amethyst Mini-series #3, right after Amethyst finally stripped Mordru's powers for the time being and stopped Flaw and The Child from taking over Gemworld, there was a quiet moment where you could see Lord Topaz knelt before the ashes of his sons which were killed by Mordru.

Amethyst was ready to leave the scene when Lord Topaz muttered, "What about my sons? What do we do next?"

AS you can see Amethyst's blunt response in the image on your right. Suffice to say, Lord Topaz wept and did not appreciate her blunt response.

That's how I felt when I read Billy Bean's dumb book, Going the Other Way. I wanted to tell Billy Bean that Sam is dead, now quit moping around. Who is Billy Bean? He is former Major League Baseball player who came out of the closet a while after he retired from the post. He is certainly not the person to look up as a role model. Becaue he is fucking stupid. More on this in few minutes.

Before I run off the subject, I want to emphasize that I did not buy Billy Bean's book -- I refused to. Because of what happened three years ago in the District. What happened is that I learned that Billy Bean was to give the lecture and autograph at Barnes and Noble Booksellers in Downtown DC, I decided to call the store to request an interpreter. They said that they'll provide one. When I came in a week later, no interpreter was in sight. I was annoyed. I approached the BN staff who gave me the routine bullshit turnaround. I decided to email Billy Bean to show how much disappointed I am. Billy Bean finally responded ... 10 MONTHS LATER with cheap-assed paragraph. That was a major turn-off. Of course, his response was such a retard one.

Now back to his book, how did I get to read it? My roommate mentioned that he bought it few years ago. I decided to read 245-page book, it was such a fucking torture to read the book filled with paranoia, narcissism, naive and delusional.

I play sports in high school. I made it clear to the players that their homophobic remarks were not necessary when I was in high school. I was 21 when I have had enough of being in the closet -- I was honest with my friends and even with my family. Why? Because I'm sick of dealing with people making these crude remarks in my face. By being honest with myself, I could turn the tables on people and make sure that they do not do that around me.

Billy wrote that it did not strike him that the homophobic slurs and jokes in the locker rooms do make a negative impact on men who are in the closet -- What? He never thought about it?! That indicated what? Billy is neither naive or selfish, he may lack common sense as well. It is always about himself. He wants to please others in order to enrich himself with the opportunities. 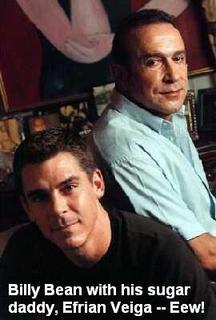 When Sam died, Billy went on to whine about how lonely it was for him -- I'm like, "Whose fault was it? Yours! You asked to hide everything -- even, Sam loved you but you also forced Sam to hide for you, fuckwad!!" He cannot complain how lonesome it was -- after all, he had the resources to get around -- he lived in West Hollywood! He cruised guys in BALLYS' locker rooms! He lived not far from Hillcrest! He visited Castro District from time to time! And he had these opportunities to figure out things on his own. He chose to bury himself under the sand and when Sam died, he whined for a while.

And he found a sugar daddy to contend with before he retired -- then he decided to come out of the closet. Go figure. What a guy! Suffice to say, his life was pretty much, in my opinion, was waste of time, trying to please himself all the time. It is all about him, himself and his needs. Jeers to his book.

In my book, Billy Bean is a loser, no question about it. Anyone who has courage to be honest with everyone and attempts to reduce homophobia in the locker rooms are, in my opinion, winners. Billy failed.

What a narcissistic prick.