Only 39 days to go before the NCAA Women's Basketball starts the practices -- on October 15, 2005. It is the national holiday for collegiate basketball fans, really. You know, I did not realize that it was 15 years ago that Virginia Cavaliers battled Tennessee Lady Volunteers in the National Championship Game and lost in an overtime in New Orleans, Louisiana. 15 fucking years ago!

And before Title IX, the NCAA did not sponsor the women's basketball tournaments. So I did not realize that last spring was 25th Anniversary of NCAA Tournament's sponsorship -- but that does not matter ot me. Title IX did a lot of good things. I do not care if someone said that it deprived some male participants from participating in wrestling or fencing!

However, I stumbled upon the old pictorial book called "At The Rim: A Celebration of Women's Collegiate Basketball" in a box today -- I thought I'd show four favorite pictures from the pictorial book. Enjoy! 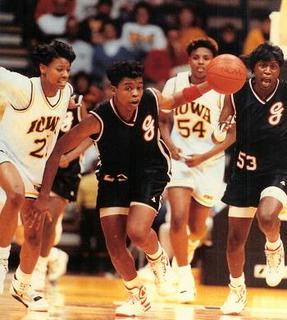 In that game, it was the Big Ten/SEC Challenge, a copycat of Men's Big Ten/ACC Challenge which Georgia routed Iowa at ease. 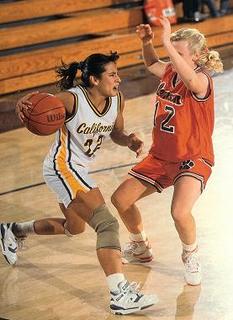 Peggy Sells of Clemson: In this picture, Clemson Tigers travelled to UC-Berkeley and killed the Bears. The girl in Tigers' uniform is none other than Peggy Sells.

However, this picture always bothered me for years because each time I see the picture, I quickly thought of Dyan Newman, Todd's wife! I once teased Dyan that she played in that game.

The reality is that Dyan Newman can play basketball -- she shoots very well back. I was impressed with her. 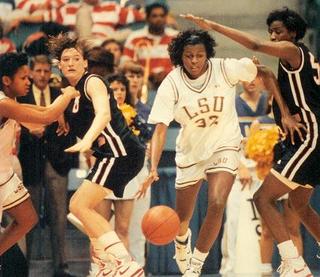 This Is The One! Remember Sue Gunter's protege Dana Chatman which I wrote a while ago about how Sue managing to make Dana believe in her system to a point where Dana went out and won the SEC Championship after beating three ranked teams in three days.

AS you can see Dana Chatman being guarded by Georgia's Camille Lowe on the left side, Dana's face indicated that she was determined to win it all whether if the defender is on her all night long.

This is why Sue Gunter did not hesitate to entrust the LSU Women's Basketball program to Dana Chatman. 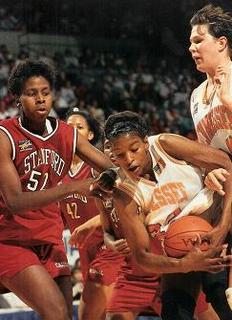 AS Long As No One Sees Me, I'll Shove You! This is a certain favorite picture of mine. Stanford's Val Whiting shoved Tennessee's Daedra Charles as she attempts to control the rebound while her teammate got her hand stucked inside Daedra's arm. You can see Val's eyes darting on Daedra -- you see there is a reason behind this.

Both teams are rivals. They were playing in the Final Four where they had to battle hard in order to get to the National Championship Game. There is no love lost between these two teams, even today.

I can relate to Val Whiting's response -- I do this particular tactic on anyone else who dares to doublecross me in any aspect of life. That is my character, I guess.

Ahh, hope this is fun lesson for y'all to peek in my favorite pictures out of this great book, published in 1990.

One More Thing: The review of JadeFilm's Bruce Hlibok Story is coming up next -- let's say, I resonated with it. And of course, it pissed me off.