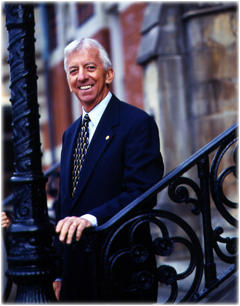 AS you may already heard, the rumors spreaded like a wildfire (and I'm sure it raced across the globe twice or thrice already!) that Gallaudet University President Irving King Jordan will retire effectively December 31, 2006. His announcement today at Gallaudet's Elstad Auditorium prompted various reactions from all sides. Because of his announcement, Gallaudet classes were cancelled for the remainder of the day.

Jordan has been the President of Gallaudet since 1988 right after the Deaf President Now Protest. The protest, which effectively became the movement of some kind, has sent the ripple effects on Deaf Schools across the country and the world. What kind of ripple effect? By placing the Deaf person in a leadership position prompted many Deaf schools across the world to can the hearing superintendents and replace with well-qualified Deaf leaders.

With Jordan as the President, he underwent some major changes at Gallaudet building the Gallaudet Univeristy Kellogg Conference Center, the Student Union Building/Student Academic Center as well as promising to build replace the Mary Thornsberry Building with a brand-new building in James Lee Sorenson Language and Communication Center.

Naturally, he underwent some questionable motives such as removing Dr. Roslyn "Roz" Rosen from her position as the Vice-President of Academic Affairs and put his puppet in place, Dr. Jane K. Fernandes as the Provost of Gallaudet. Dr. Jane K. Fernandes is not well-liked by many peers, students, faculty and staff alike. Faculty members sneered at her in the first place because she never taught nor worked at a college. Students sneered at her because she kissed the floor where Dr. Jordan walked.

It was alarming to note that Dr. Jordan originally said during the speech, "President -- Provost Jane ..." in an abrupt, but quick correction to mention the mistake. For years, people at and around Gallaudet has feared this: It is possible that Dr. Jordan has prepared the office for Dr. Jane K. Fernandes all along in the first place.

I predict that Dr. Jane K. Fernandes will be the next President, whether we like it or not. Dr. I. King Jordan intends to have her at all costs. Even if it will jeopardize everything that we fought hard to believe in. Since Dr. I. King Jordan did appoint many persons to the Board of Trustees, they will do him a favor by giving her the keys to the school.

Only time will tell.

But at this time, I want to extend congratulations and best wishes to Dr. Jordan's retirement starting after December 31, 2006 after his 18 years of service to the University as President.