All Bruce Wanted Is To Express Himself In His Own Way

In Manhattan on 58 Street between Lexington Avenue and Second Avenue at a bar called Townhouse Bar, I occasionally came in to meet and greet a bartender who can sign very well, Greg in the last 5 years. 5 years? I met him before I moved to New York, that's why. This bar is not my type, mainly because it is for rich, older gay men in late 50s to 70s who are being chased by younger boys in their 20s to 30s. But I enjoyed chatting with Greg, himself a lawyer, on almost everything else when nobody is ordering the drinks.

One time, I met a deaf fellow named Geo Garcia at the bar, we had a conversation about a lot of things. He remarked, "It is too bad that you never met Bruce Hlibok, you guys had something in common -- if he was bit younger and with your age, I won't be surprised that you guys would be an item -- you guys would talk about things that not many Deaf people would wanted to touch upon it!"

At that time, I vividly heard about the name itself, that he was the eldest brother of the Hlibok clan and that he was tumultuous artist that alienated many people. And that he died of AIDS. That's it. That's all I knew of him.

Then I got a DVD from a dear friend of mine about the documentary film on Bruce Hlibok produced by Ann Marie "Jade" Bryan called, "On and Off The Screen: The Bruce Hlibok Story"

Normally, the documentary tends to be an hour-long or two -- but this is 183 minutes long which means more than 2 hours and half of viewing. I thought the tape could be edited up to 2 hours, maximum. But more power to Jade.

What do I think of the film? It is safe to say that I would not know more about Bruce if not for this film. It was startling to see many resemblances between me and Bruce. His love for complicated stories, and so do I. People often regarded him as angry person repeatedly throughout the film. In the end, Bruce said, "Anger? When I push the truth in their faces, they misconstrued it as anger." I cannot paraphrase the exact comments but you get the idea. It resonated with me because I often thrusted the truth in people's face -- they misconstrued me to be the angry person whereas I was merely telling the stories that they do not want to hear. 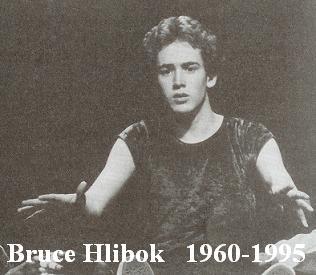 All in all, he was the most misunderstood and controversial artist, and so do I. He also has a fag hag in Ellen Roth, so do I with the legions of fag hags scattered throughout the country. He was gay, so do I. His parents were Deaf, so do I. He has siblings that he antagonized at times, so do I. He loves to read anything that comes his way, so do I -- ask my parents, siblings -- I would prefer to read than to go to the park to play. He wanted to write, produce and direct the plays, so do I. (But I like to think I can direct and produce. I have a box filled with unfinished scripts that I want to do. But I digress!) I can tell that his parents felt he "strayed" by being gay rather than being straight, just like my parents felt. Except that I was blunt and clear with my parents that they cannot do such a thing to correct it at all. Their comments goes in my left ear and out the other. Bruce valued his parents' approval, I do not. But was it his fault? No, it was that he lived in a wrong period of time where Deaf Gay people were pretty much ostracized by their peers due to the fears and misinformation.

Bruce was kind to mention that he does not like National Theatre of the Deaf because it is traditional show geared for hearing people to enjoy, not for Deaf peple to enjoy. The NTD generally do not touch the social issues of humanity, it just do the scenes that makes people bellow in laughter. The last time I saw the play associated with NTD was in 1992 when they came to Gallaudet. I left before the intermission -- I cannot stand its exaggerated signs or body language -- it is as if someone tells Deaf actors/actresses to blow up their signs to entertain the audience to laugh. To me, that is very degrading and offensive thing to do. I never saw a play produced by NTD that touched on the serious issues of society. Never did, never do and probably never will. That is something that Bruce and I always wanted -- to see a play that has real conflicts, not some ragtag bullshit that you can see in cheap porns, really.

Bruce's father, Al, remarked that he blamed "Runaways" for messing up Bruce's stability in the process. Perhaps he is right, perhaps he is wrong. Their parents' lack of acceptance of their son's sexuality is what led him to rely on someone's affection. I was disturbed when I saw Laurie Robinson (She signs badly and she is interpreter?! God preserve us!) mentioning that David Schechter, an actor who was 24 working on stage with Bruce who was only a teenager at 17, told Bruce that in "France, it is OK for adult to fuck children."

In other words, it is evident that Bruce loved David, David took advantage of Bruce's vulnerability and youth (I consider David to be a molester, though!) -- then suddenly, the broadway show got cancelled, David just flinched Bruce off his shoulder just like that. Leaving Bruce to lick his wounds on his own because nobody accepted the truth that he is gay.

I think I know where he turned to seek for his affection -- considering the fact at that time (late '70s and early '80s), HIV/AIDS Epidemic began to swamp the gay clubs, bars, and bathhouses across the nation -- Bruce probably got himself infected not on purpose when he was at the low point of his life when he seeked for affection by his peers. Talk about the double whammy feelings, where else can he go for some compassion or support, really?

He reminded me of my first love and things that fucked itself up in the process. I could not turn to my parents for moral support -- then suddenly, drama ensued to a point where my ex's parents wrote a letter to my parents about my "relationship with Todd" while my parents were on vacation!

Of course, I had to read the letter -- holy smokes! They wanted to talk with my parents about "homosexual relationship" of me with Todd. Panicked, I had my sister to call Todd to notify them that I was killed in an automobile accident to prevent their parents from getting in touch with my parents at a later date! Suffice to say, my parents were puzzled to get a sympathy card a week later!

Unlike Bruce, I did not run to gay bars, clubs and/or bathhouses for affection -- Richmond, Virginia does not have a gay bathhouse nor the internet back then -- so I was pretty alone, so I turned to what makes me feel better -- the food in the refrigerator. You get the picture. Like Bruce, I did not have any help from the professionals nor loved ones. I was on my own. Let's say, I gained noticeably and has been like that ever since. Ain't life grand? Not. 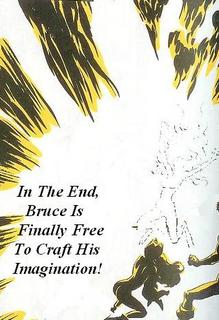 One thing about Bruce is that despite the setbacks in his life, he did not let it stop him as he went on to produce few memorable plays that rattled Deaf and hearing audiences. He attempted to touch on social issues which many Deaf people did not appreciate that. Bruce was relentless but he was clearly hurt by what others said, I kinda wished I could be there to tell him to fuck 'em off. That's what I do with my readers when they do not agree with me.

So I can imagine what it is like to be in Bruce's shoes -- unfortunately, he was ahead of his own time in his own terms, but again, so do I in my own terms. Only few friends of mine can understand what kind of person I am. Why do you think Chlms endured dealing with me for the last 14 years? Because she probably understood me more than many people can. But like Bruce said, people will love art more when someone is dead.

I enjoyed the documentary film -- it was shame that Bruce and I never had the opportunity to meet and share our feelings about this, that and there. We'd have a good time -- hell, I'd date him. Perhaps, in another life, we shall meet.

For futher information on Jade's documentaries, you can check her website at www.jadefilm.com.