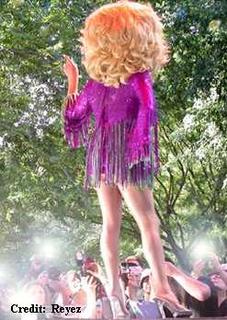 It is interesting to note that the National Hurricane Center in Miami, Florida selected the name of Rita for the newest tropical storm which is now travelling westward ho towards Texas.

Rita is currently located in Bahamas Islands and is now harboring 70 MPH winds. Many said that it will head straight to Texas -- it may hit Houston, the city where the majority of evacuees from Katrina's wrath in New Orleans. I think it is hilarious but c'est la vie!

But I'm not certain whether if Rita is going on that path -- know why? Because it is mid-September, the planet is now slowly moving north-er as the sun goes south, the jetstream is bound to move flexible -- if the jetstream stays its course, Rita goes straight to Houston. If it moved north, look for Rita to hit New Orleans or somewhere else.

I thought it was amusing that they chose the name, Rita. Know why? I'm not talking about Rita Ribera. Yeah, her brother looks like Mr. Joe Camel -- he may be the offspring of some camel but who cares? Let's back to the name itself.

In '98 or '99, at Gallaudet's Ely Center, there was a booth sponsored by Student Body Government on Valentine's Day -- you pay $1 to fill out the form and you'll get the names of opposite sex that matched with your types. It is so heterosexual, is it? So I complained to Rayni. She had this evil grin I loved the most. She said, "Why don't you fill out and put it in women's box and see what happens next?"

I needed a new identity -- there is no way in Heavens or Hell that I'll put my real name on it because men at Gallaudet would be so upset to find my name on their Top 10 list. We saw a well-known woman named Hilly Owens walking by -- I stole her last name. Now, the last dilemma is the first name. Rayni and I came up with Rita. Know why? My name is Ricky -- take the first letters out. My last name is Taylor. Take the first two letters out. You get Rita Owens!

I did the deed.

A week later, I was amused to see some people on my list -- among them are: Brian Morris, Raymond Merritt and Jesse Thomas. I cannot remember who the rest are. Suffice to say, I tried to keep it quiet as can be. Rayni, she has a lethal mouth to start with. The rumor exploded like a wildfire that Rita Owens was me.

Some people asked me if the rumor was true. I confirmed that it is. Brian was not happy because in his views, I wasted "one" line of his list -- since he's straight and back then, he was desperate for a woman. He feels that me being on the list ruined his chances.

Jesse was a good sport. He cracked jokes about it.

Yeah, for a minute, my name was Rita Owens. It was interesting to read the names of straight men who matched with my preferences. And now this Tropical Storm is Rita. Interesting ... but why did Rayni have to tell someone about it? It was certainly a big news on the campus when someone found out that Rita Owens was me.