Was out of office today on an errand. When I was done with the errand, I had a quick lunch with Benis. Talked a little then he mentioned that Franco is on AIM and if I want to say few words, eh? I nodded and IMmed him to talk a little. Asked him if he's recuperating all right from his devastating loss of his best friend, he's okay as can be.

Told him that I care, even if I teased him bit too much but I do care. Just wanted to make sure, is all. Franco replied, "I know you cared. That is why I have the utmost respect for you, RT."

That was the nicest thing anyone had said to me in a while. Sigh. Love ya, hottie.

Ahh, I should mention that a certain friend of mine for a long time recently set up her own blog. She said she was inspired to create one. How sweet.

To a certain person out in the West, shame on you for exploiting your family in the name of desperate attention! You know who you are! And get a clue, you're one lousy actress.

Today, during the errand, I was at the store that sells bedframes and matresses. I saw two Port Authority police officers in uniform standing very closely with each other and they were discussing with a guy who sells these things. These hot guys were talking about buying a queen-sized bed, which is right next to them. Perhaps for themselves. Nice, nice, nice.

To amuse your own thoughts, here is a picture to watch, think and sigh. 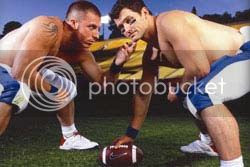