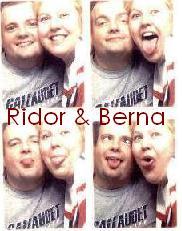 Friday Night: Berna, Mona and Berna's father, Egil arrived around 9 PM. It was good to see Berna alive. Of course, we had to catch up with everything between Berna that Mona and Egil could barely get to follow up. But we were gracious enough to include them in our myriad of conversations, really.

You see, Berna, Mona and Egil are all from Norway. So they conversed frequently in its own Norwegian Sign Language that I cannot really follow at times. Sometimes I step back and watched Berna translating what I said to her father so that he could understand what I was trying to say. Man, I'm telling you, different sign languages are beautiful. I think it is condescending to assume that ASL is the most beautiful language. I think there are many beautiful sign languages around the world.

However, at one point, we went to Charlie Brown's Bar & Grill where the Deaf Professional Happy Hour took place in King of Prussia, a suburb of Philadelphia (In its region's sign for King of Prussia is: KING PUSSY. Which is tacky to say.). Many deaf people were conversing in the bar area -- we chose to dine in secluded area where we can just chat in private and all that. Shortly as Berna was talking, a deaf woman that we do not know who, peeked in our conversation -- it was rude. I turned on to her and asked nicely, "What's wrong?"

Let's say ... drama ensued to a point where Berna had to interfere and tells them to back off. One woman asked Berna where they came from. Berna said, "Norway." This dumb woman said, "Newport, RI!" What the fuck? Berna said, "NO! WE FROM NORWAY! EUROPE! WE ARE BUSY. BYE!" As they walked away (there were four of them), they were saying that we were rude. Here is the flash message, it is rude to watch us converse. Do it in a discrete manner. I do it, so can you.

Saturday: Before we hit the road to New York, Berna dropped the bombshell. She said, "Oh, by the way, we are not driving. You will drive around and show us the places in New York." The mode of transportation was white Ford Bronco SUV. It is big. And I am not surprised that some people mistook the SUV as OJ Simpson's white Bronco. So off to New York, we went.

I think the Norwegians were mighty impressed with what New York has to offer. Driving into the city was a cinch. Finding the parking for this big white SUV is problematic if you do not know where to park it. But lucky me, I know the tricks. We visited The Battery Park, Ground Zero (Again!), Brooklyn Bridge, Brooklyn Heights Promenade, Chinatown ... then we had a dinner in East Village.

We stopped by Nowhere Bar, the site of Big Lug every Tuesday and I was greeted by the familiar bartender -- he recognized me and went out of his way to hug me and all that. River and I talked a little as Berna, Mona and Egil took the bathroom break. Berna came back. River is hearing fellow who can sign very little. His receptive skills are not that good, but that is OK. Berna said, "He's cute."

I said, "Really? I'll tell you outside about it."

Berna translated to Mona and Egil -- as I told River that it was good to see him again and we headed out to a restaurant on St. Marks Place. I smiled and said, "What do you think of River?"

I said, "He was she. FTM trannie. He used to want me but I wanted a real cock."

Berna stopped in her tracks and turned to Mona and Egil who were oblivious as Berna had to take a second to compose herself and told them as well. Only Egil shrugged as if nothing happened. I bumped into someone I knew at Dicks Bar as well. After dining, we wandered around Times Square and Midtown -- showed them these famous skyscrapers including Citigroup Tower, the Lipstick Building, Grand Central Station and its connections with MetLife Building. Blah, blah. Two hours late as scheduled, we got to Kaybee and Sarah's pad in Hell's Kitchen.

As we settled down in Kaybee's pad, Kaybee looked scruffy and tired. It was good to see her. Egil was too tired to go out as he decided to stay put while Berna, Mona and I headed out to few bars in Hell's Kitchen -- Posh and Barrage. Before we headed out for the night, Egil could not find his digital camera. We assumed it was in the SUV. I joked that I'll pick it up and if I get drunk, I probably will bash his camera to smithereens. Of course, he freaked out. WE went down to retrieve his camera -- but we could not find it. Berna found it under the SUV. It was flattened by the SUV's tire! Suffice to say, Egil said he forgot to put it away while he gets out of the SUV to help me steer the big SUV to park by the road -- somehow his digital camera fell on the street and I rolled the SUV on it. Bad karma. But nevertheless, he got a better digital camera the next day.

Berna, Mona and I went to POSH and BARRAGE and had nice drinks. We cracked jokes and all that. Typical scenario of a gay bar, really. We discussed the men's body language -- I told Berna that it is easy to identify which one was insecure when they grew up in elementary and high schools. These muscular guys tend to be the ones who are insecure -- they try to make out for what they lacked in their heydays. They are often the bottoms but tried so hard to act like they are man. All you have to do is to give them a joke, they screech like a girl. That is the cue.

We went back to Kaybee & Sarah's pad, Sarah was up and running. It was good to see Sarah. We went to the roof and relaxed around. They had the best view of Manhattan. They live on 11 Avenue facing the wide view of Midtown Manhattan. Absolutely stunning view. It was getting late ... had a long chat with Sarah.

Sunday: I was startled to learn that where Kaybee & Sarah lived is right next to the studio of The Daily Show with Jon Stewart! Kaybee mentioned that they just moved in last August. I'm a fan of that show. I'm a fan of Jon Stewart!

We had a delicious breakfast at Renaissance Diner on 9th Avenue and 52nd Street. Its shakes are something out of this world. Even for Norwegians, they went UMMMMMM and UMMMMM on these shakes. It's crazy. After that, we walked all the way through Times Square to get the digital camera for Egil. Soon after that, we saw NYC's Naked Cowboy taking the pictures with some female senior citizens. They were groping him. Only in New York, I sighed.

Egil insisted that we have to check the Empire State Building before he flew back to Bergen, Norway. Try to find that town if you can. It took about two hours to get to the 86th floor. The variety of walks around Midtown from 11 AM To 6 PM took its toll on our feet. On 86th floor, it was brisky, clear and very windy.

After visiting Harlem and Central Park, it was time to leave the city as I maneuvered through the streets of New York -- they were kind to me as we left the city en route back to Philadelphia.

It was good to see Berna again. I had a good time with Mona and Egil. For 27 hours, I hope they had a blast time in New York with my guide. I feel New York is the only place I wanted to go back when the time is right. And I will be back.

On a side note, after talking with Berna, Kaybee and Sarah, I may undergo a massive change in a short time. Only time will tell, readers. And after all, it is for me to know and for you to find out much later.