The film that I striked out has no captions -- so off it goes back to the mail. 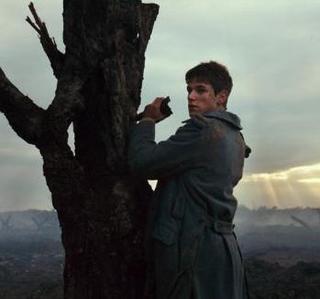 However, if you loved the film, Amelie, then you should like the film, A Very Long Engagement. The director and actress reunited to make this film. It talked about this crippled woman, played by Audrey Tautou, who were afflicted with Polio disease when she was a girl. Then you get to see the charming dialogue between the crippled girl with a cute boy, played by Virgil Leclaire -- and the cutest scene where they kissed between the lighthouse windows ... let's say, Manech had a thing for Mathilde since he was a kid. Naturally, they were engaged. Suddenly, the Great War took Manech to the front lines. But that does not stop him from using the sticks to carve M M M on the trees, rocks and stuff during the Great War. What does it means? Find out for yourself.

Suffice to say, when the Great War (World War I) ended, Manech was killed but Mathilde insisted that he's alive. Off on to a long adventure which ends on a happy note, very rare for foreign films like French!

This film touched me because I have a relative who got Polio disease when she was a child, my aunt, Helen. She does not let it stop her at all. I rememberred going to the deaf club in Richmond which was set up on third floor of an old building in Downtown. With no elevators. The long staircase was dimmed and has dark brown steps, the walls seemed to be dull green. Helen would dress nice just to show up at the deaf club for no particular reason. Like Mom and Drandma. She would park her wheelchair at the bottom of the long staircase, then she would apply her arms on the wooden banister. Off she flew -- she zoomed upwards to the top, literally -- to the third floor of the building. At the top of the building next to the massive doors is her crutches.

Nobody was going to deny her the right to enter the place that she can feel comfortable, away from the big, bad hearing world on that surface floor down the staircase.

I cannot imagine her without it, it is part of her. Like it or not, just like the film's Mathilde. It was such a good film that touched me.

Right To Be Deaf Is An Abomination: Two words to describe Ian Leslie Ludlow is mental defective. To use "music" as the means to be superior over the group is always far-fetched argument that makes me roll my eyes ... all the times. Yes, you can enjoy the music that I am "devoid" of, but is it a requirement to have one? Barf.

Want To Be Pissed Off at French? Then check the link. I may be the only person in the world that thought the French is not civilized. Many people said that they are civilized. Actually, eating snals are not civilized. Eating people are not civilized. People? I have a book which is in the basement -- am not in mood to search for it -- but it is documented book about the rural French who turned to cannibalism in late 1800s after the French Revolution and the Napoleon Era. Yes, they may have arts, cultural stuff and all that. But they are not better than anyone else. I knew of two persons, Ben and Aaron, they always looked up to French as something else. I studied French under Ms. Carole Frankel at Gallaudet. She was quite a horror but guess what? I absolutely adored her! Her antics were truly stunning and eye-popping. But she always emphasized that French are not above everyone else. They are just like us. So since then, I never regarded them as better than us.

Me Impressed, Though: Last night, I caught the song by Audioslave's "Doesn't Remind Me" on MTV. It was great -- it is not often that the songs produced by hearing people caught my attention but this one did. It pretty nailed on everything what is wrong with this country. Impressive.

Maybe Roy needs a therapy session or two. But who really needed the therapy sessions? The folks at Focus on the Family organization, they are gloating and using Silo & Roy's break-up as a proof to retaliate against people who are gays that being gay is not normal. This is the same organization that accused cartoon characters of trying to influence children to be gay. SpongeBob, Barney, Purple Teletubby and what else?

To amuse the insane folks, I hope Scrappy falls into the aquarium occupied by Killer Whales and gets mangled in the process for breaking Roy's heart. Roy deserved a cute boy. Silo needs to be shot and cooked.

Remember Douglas Tilden? I mentioned about Douglas Tilden last April 18, 2005 on my blogsite. Then I saw this picture of his statue that he sculptured in San Francisco on The Tacticle Mind Weekly Extra #14, a free e-zine of the international signing community.

You know the cliche, what Deaf people made, they stay for years. What hearies made, they fall apart sooner or later.